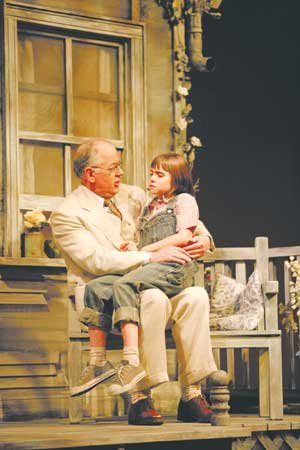 Think Shaw is more talky than entertaining? You’ll think differently if you catch the production of The Philanderer at Niagara-on-the-Lake.

The early play is a fine banquet of wit, not least because it’s merciless in its treatment of all the characters and their viewpoints, from feminism and theatre criticism to the war between parents and children and the institution of marriage.

The title figure, Leonard Charteris, is an incorrigible seducer of women. As the curtain goes up, he’s wooing Grace Tranfield, a widow who espouses the views of the New Woman. At the same time, he’s trying to disentangle himself from the predatory Julia Craven, who wants marriage rather than the friendship that Charteris desires.

Including a scene in the Ibsen Club, which admits only unwomanly women and unmanly men, Shaw plays pointedly with stereotypes and contemporary views of the sexes. In the hands of director Alisa Palmer , the company flies with the Shavian language. Think of it as a kind of dramatic surfing, with the expert cast regularly hanging 10.

In the lead role, Ben Carlson plays an early version of John Tanner in Shaw’s epic Man And Superman (a role Carlson did to perfection a few years ago) no one can handle Shaw’s dialogue more skilfuly, making it perfectly clear despite the philosophical quandaries that pop up in his reasoning.

He’s matched by the voracious Julia of Nicole Underhay , one of the company’s most accomplished performers. Julia uses all her wiles to win Leonard. Deborah Hay ‘s Grace is more modest, though she’s steely in her own right.

This is another production that shows off the ensemble strength of the Shaw Festival, with Peter Krantz as a gruesomely funny physician and Peter Hutt and Norman Browning as fathers who can’t control or even quite fathom their modern daughters.

TO KILL A MOCKINGBIRD by Christopher Sergel, adapted from the novel by Harper Lee, directed by Susan H. Schulman (Stratford). At the Avon Theatre, Stratford. Runs in rep to October 27. $50-$93, student $26. Rating: NNN

Harper Lee’s award-winning novel, To Kill A Mockingbird , can certainly take to adaptation. The Gregory Peck film version is probably more popular – and certainly better known – than the original.

Christopher Sergel ‘s stage version, though, is another matter. The original is a story about adolescence, family and racial relations in 30s Alabama, as much about the town and its atmosphere as about narrative. At its centre are Atticus Finch, a lawyer with a strong sense of right, and his young daughter Scout, through whose eyes we see the action.

The atmosphere is there, in part through the evocative design of Charlotte Dean and Kevin Fraser , but Sergel puts the grown-up Scout (now Jean Louise) onstage to guide. Michelle Giroux ‘s a fine actor, but every time she steps into the story everything stops dead we’d do better listening to an offstage voice.

Thankfully, the Stratford production, directed by Susan H. Schulman , has a strong cast, beginning with Peter Donaldson as the humane Atticus, who knows the evils of the world but won’t cave in to them.

And the children in the show are terrific, too Abigail Winter-Culliford as the questioning tomboy Scout, Thomas Murray as her imaginative older brother, Jem, and Spencer Walker as their summer visitor Dill, a bespectacled teller of tales who can’t be shut up.

Others are equally strong: Patricia Collins and Joyce Campion as two very different neighbours, Barbara Barnes-Hopkins as the Finches’ maid, Wayne Best and Dayna Tekatch as a manipulative father and daughter, Laird Mackintosh as the ghostly Boo Radley, Dion Johnstone as Tom Robinson, a black man accused of raping a white woman.

The trial sequence, while one of the best remembered sections of the story, is only a part of it, and Schulman treats the episode in too even a fashion there’s little build, little change in tension from first to last.

This Mockingbird flies fitfully when it should soar.