PORTIAS JULIUS CAESAR by Kaitlyn Riordan and William Shakespeare (Shakespeare in the Ruff). At Withrow Park (725 Logan). Runs to. 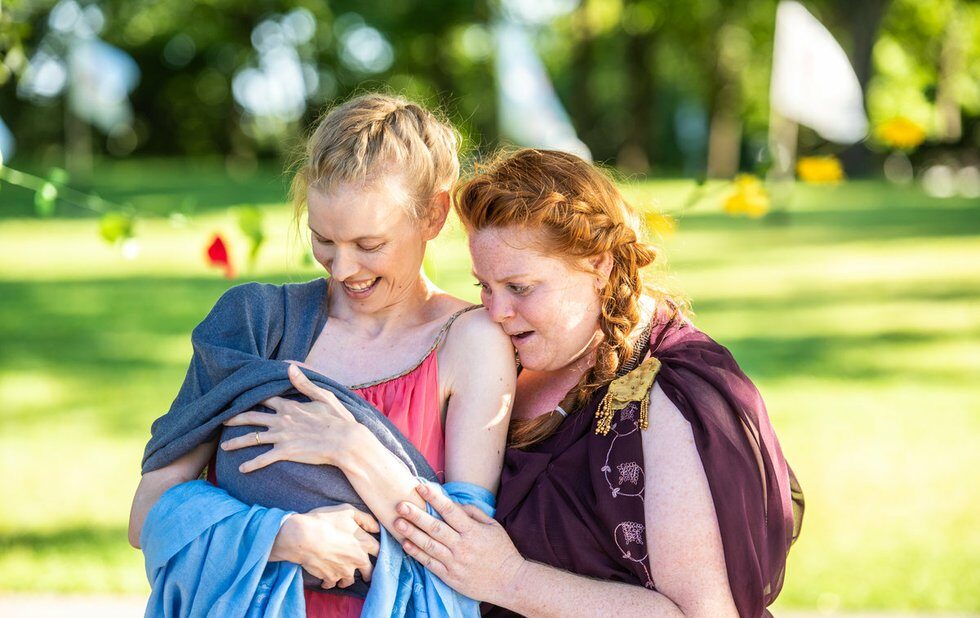 Christine Horne (left) and Nikki Duval give voice to the Bard's rare female characters in Shakespeare in the Ruff's latest outdoor offering. (Photo by Dahlia Katz)

In their seventh year enchanting the east-ends Withrow Park, Shakespeare in the Ruff offers up their most innovative show to date a creative and poignant overhaul of Julius Caesar that presents the tale of political tumult from the perspective of often-sidelined women characters, including (but not limited to) the titular Portia.

To reframe the classic assassination plot, artistic director and founding member Kaitlyn Riordan borrows text from 17 different Shakespeare plays (a process the company first experimented with on a smaller scale when reworking the ending of Two Gents in 2012) and seamlessly integrates these with her own writing to create a new show that feels both authentic and original.

Similar in approach to Cole Lewiss 2017 SummerWorks show These Violent Delights, which reimagined Romeo And Juliet from the standpoint of the Capulets Nurse, Riordan moves the locus from conflicted senator Brutus (Adriano Sobretodo Jr.), to his initially unassuming wife, Portia (Christine Horne). As tensions in Rome grow over Caesars (Jeff Yung) anti-democratic moves toward monarchy, she faces her own difficult choices in allegiance. These include her close friendship with Caesars frustrated wife, Calpurnia (Nikki Duval), and Brutuss stern, politically-savvy mother, Servilia (Deborah Drakeford), who helps orchestrate the senators murderous plan.

Foregrounding Shakespeares female characters provides more than just a fresh take on a well-known story it suggests all the ways women would certainly have factored in other stories, too as strategists, informants, confidants and advocates if the Bard had been more inclined to include them. (Riordan has done the math and notes that 84 per cent of Shakespeares characters are men.)

Standout scenes include Portias forceful attempt to make Brutus take her seriously as an equal partner in decision-making, and Calpurnias hard-hitting encounter with her late husbands consort (Tahirih Vejdani).

As the well-paced tension builds to a bloody climax, director Eva Barrie makes sure audiences get lots of what theyve come to expect from the reliably excellent Ruffians: strong, engaging performances that make complex language and stories easy to follow, and clever uses of the tree-framed stage and surrounding park space.

Riordans feminist interpretation resonates with present-day politics, specifically the #MeToo movement and the Trump presidency. But it also casts the entirety of the Bards canon in a new light, inviting all to imagine what other plays might look like if given a similar treatment.