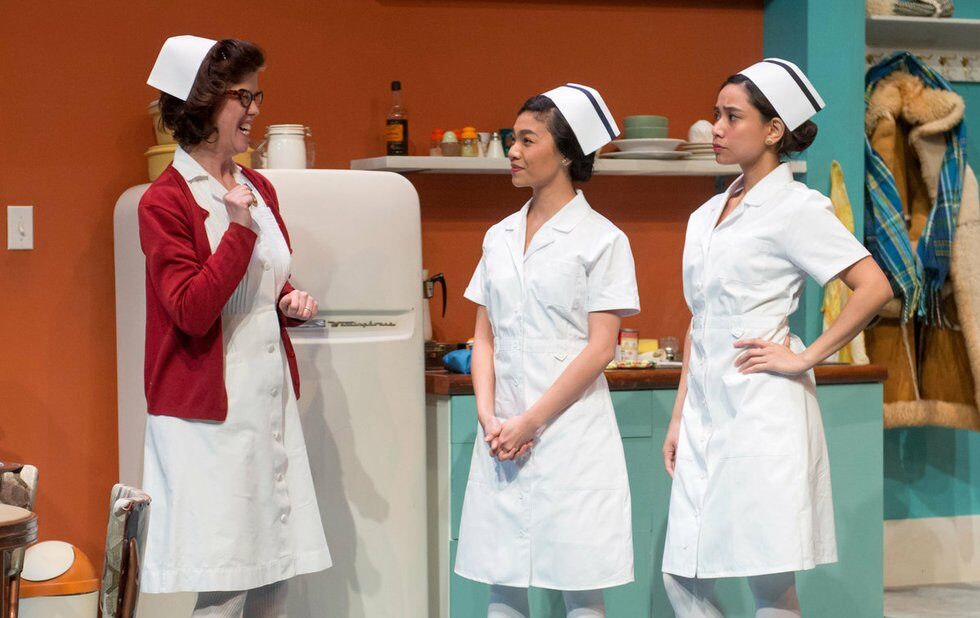 The plot turns on these all-white characters inability to differentiate between their new Filipino coworkers, Indepencia (Isabel Kanaan), who goes by Penny, and Purificacion (Belinda Corpuz), who is called Puring. Badian creates a string of awkward and telling mistaken-identity moments similar to those befalling the twins in The Comedy Of Errors despite the fact that Penny and Puring are not alike at all.

Penny, aloof and self-assured, comes from a rich cosmopolitan family in Manila and looks at Arborfield as a big step down, while Puring, a devout Catholic who has never been in love, hails from rural digs and is more amenable to her new surroundings. The staff constantly make cringe-worthy comments, calling them practically twins and assuming that they must be close friends even though they just met for the first time on the drive from the airport. One moment that gets big laughs involves Marie Annes attempted system for telling them apart.

The romantic tangle begins when Wilf falls in love with one of the nurses but botches his overture by mixing them up. The ensuing fracas is quite funny, but it also calls attention to everyday slights and unintentional insults that casually other members of marginalized groups. The brand of Canadian racism explored here is not particularly dark when compared to other plays on the topic but is important to highlight and call out, especially since it often flies under the radar.

Director Sue Miner gets big, cartoon-like performances from the strong ensemble, with Corpuzs kind-hearted Puring and Colemans sweet and supportive Charlie coming off as the most real and relatable. Crawfords rifle-toting country doctor is funny, but his Scottish accent is a tad clunky.

With a detailed realistic set by Jung-Hye Kim thats accented with vibrant 60s pastels and lots of retro eye-candy (like a vintage latch-door fridge), the show feels conspicuously like a sitcom taping.

So CBC, Netflix: if youre reading, Prairie Nurse has promising pilot episode written all over it.