Fine acting and directing give a solid foundation to this satire about consumerism, homelessness and class divisions 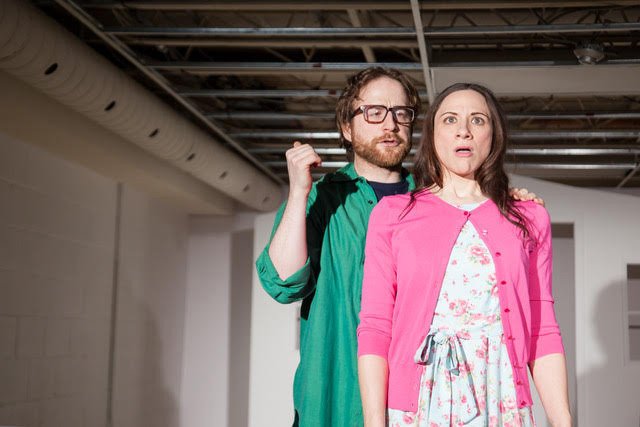 With epic housing market bidding wars making frequent headlines these days, Philip Ridley’s Radiant Vermin takes a timely and comedic look at the high cost of finding your dream home and filling it with the best stuff. A few cracks in the storyline can’t keep the actors from giving this production a solid foundation.

Expectant newlyweds Ollie (Jonas Widdifield) and Jill (Julie Tepperman) yearn to move out of their mouse-infested flat, but can’t afford to. Then a letter arrives from the mysterious Miss D (Marium Carvell), a sort of otherworldly real estate agent, offering them a free fixer-upper in a gentrifying neighbourhood if they agree to some obscure conditions regarding renovations. They become consumed with renovating. Each room they fix up betters their material life but forces them to confront and justify increasingly thorny moral conundrums.

Without getting preachy, Ridley’s darkly funny satire looks candidly at consumerism, homelessness and class divisions. But early on, once the play’s main conceit is revealed, the script runs out of surprises and starts to feel repetitive. The running time of nearly an hour and 45 minutes, with no intermission, doesn’t help.

Narrating their own story, Ollie and Jill often break the fourth wall, at one point making the audience vote on which room to renovate first. The effect is amusing and discomfiting, as if they’re forcing us into their home and lives. Widdifield and Tepperman throw themselves into the absurdity and deliver the intricate dialogue at a quick clip. Both excel at physical comedy – on full display when they re-enact a backyard birthday party impersonating a rotating cast of neighbourhood characters.