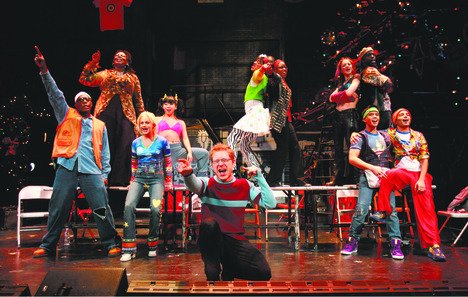 Anthony Rapp (centre) is on the Mark in Rent revival.

A funny thing’s happened to Rent, Jonathan Larson’s 1996 rock musical update of La Bohème that he completed right before he died.

Alphabet City during the AIDS plague years – we can appreciate the musical for what it is: a historical fantasy, as insightful and accurate about its time as Oklahoma! or South Pacific.

It’s flawed, but you can see why it continues to sell tickets. Essentially, it’s a paean to youthful idealism and rebellion. Young, poor, struggling artists good authority figures bad. Starving and sick? Don’t worry: that’s what friends are for.

This touring production boasts cast members from the original Broadway run, and it’s worth it to see Anthony Rapp sink his teeth into Mark, the show’s confused narrator/Larson figure. Rapp’s done the role hundreds of times (he also starred in the movie), but he’s always spontaneous, never mugging for laughs or letting his voice fall into a familiar groove.

Adam Pascal’s Roger feels less inspired, but then again, the actor’s not helped by a thinly written script and a voice that relies too much on grit for its effects.

Twelve years ago, I didn’t appreciate how carefully Larson had split up the Bohème plot. The Marcello/Musetta storyline is shared by two same-sex couples, something that was pretty radical for its time.

Some songs feel forced, a few lyrics seem mawkish (“Goodbye love, hello disease”), but Larson’s ensemble writing holds up, especially the act-two opener, Seasons Of Love, the simple, repeated melody of Without You and an anthem about seizing the day.

Rent will continue to pay dividends for its creators and make us wonder what Larson would have done after showing so much promise.

This is as good a production as you’re likely to see. [rssbreak]