NOW MagazineCultureTheatre>>> Review: A Line In The Sand 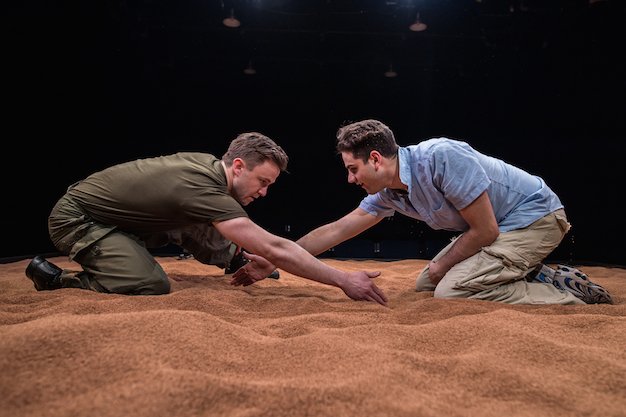 How little things change in the world of war and politics.

Guillermo Verdecchia and Marcus Youssef’s A Line In The Sand, written in 1995 to examine Canadian involvement in the Gulf War, gets a striking new production at a time when our nation is still engaged in questionable military endeavours.

It’s the early 90s in Qatar, and just outside a Western armed forces base, Mercer (Morgan David Jones), a Canadian soldier, meets the teenage Sadiq (Danny Ghantous), a Palestinian whose father has come to this Arab nation to work in the oil industry. Mercer spends solitary time in the desert near the base to avoid personal problems he doesn’t want to talk about or even recognize Sadiq sells things to Western soldiers and dreams of moving to America and getting rich.

In the second act, we hear of a serious incident involving a young Arab. Mercer, questioned by a colonel (John Cleland) intent on discovering what happened, reveals his nervousness and, eventually, the truth.  Intense, its tone constantly shifting, and ending with a surreal moment, the episode keeps the viewer off balance.

In between those acts, Verdecchia and Youssef insert a postmodern scene in which the actors read speeches to the House of Commons by Brian Mulroney and Stephen Harper, along with the playwrights’ decision to write this play and statistics relating to Canadian soldiers abroad.

Intentionally taken out of the emotional immediacy of the first act, we’re reminded of the play’s current relevance.

The three actors offer finely tuned performances under Nigel Shawn Williams’s spare direction the weekly meetings and growing closeness of Mercer and Sadiq are especially impressive. In keeping with the “nakedness” of the Factory season, the sand on which the action takes place stands in for water, money and several other props.

But the photos and a camera that are central to the action are all realistic, for photography is both a lure and an incriminating weapon in the narrative. The snapshots Sadiq sells Mercer, Mercer’s use of the camera and the combination of Wesley McKenzie’s sound design and Kaileigh Krysztofiak’s lighting, which provide the brilliance of a flash and the amplified, whip-like snap of a shutter’s click, all contribute to the production’s sharpness. Each mini-second image captured by the flash is either a shocking event, a secretive moment or something equally surprising.

Both of the men who interact with Mercer are sympathetic, Sadiq warmly so and the colonel in a more calculated way. While Cleland plays the role of compassionate inquisitor (an oxymoronic phrase) well, there’s a choppy quality to the writing that distances us during the interrogation. The emotional connection that’s been an important part of the show finally returns, and then only sporadically, in the play’s final encounter.