Review: Alphonse reminds us of the magic of theatre

Toronto's first live, in-person play deals with loss, freedom and the power of the imagination 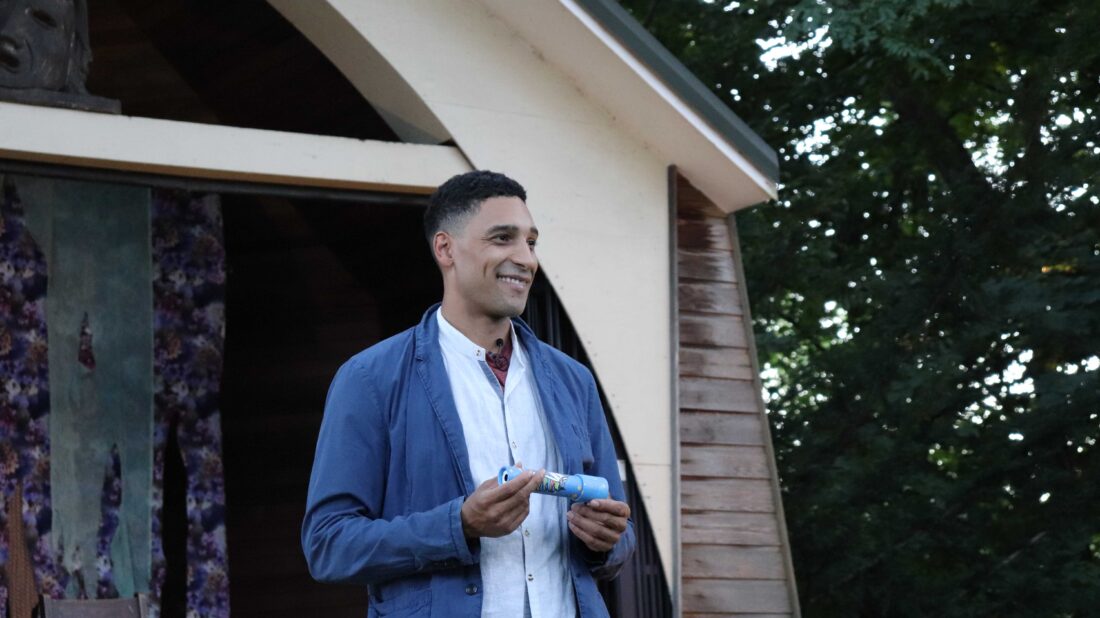 It’s been more than five months since Torontonians have seen a live, in-person play. How fitting that the first show back should be Alphonse, Wajdi Mouawad’s life-affirming solo work about the importance of imagination and freedom, two themes that resonate strongly right now.

First, some details about how the show – a co-production between Theaturtle and Shakespeare in Action – is handling COVID-19 safety measures. When you reserve tickets online, you specify how big your party is – anywhere from one to six people. The audience capacity is 75.

Once at the venue (the show plays this week at Memorial Park in Weston and then travels downtown to Dufferin Grove Park next week) you’re shown to your pod. Cushions are available. You scan a QR code for the program. There’s some physically distanced, pre-show entertainment. It’s all very spacious. Masks are required. At the end, we’re asked to exit in an orderly fashion. We did.

Now for the show itself. A young boy named Alphonse has gone missing, and his friends, family, teachers, fellow students and even the police are looking for him. Leading the charge is Pierre-Paul René, Alphonse’s brave pal who has embarked on a perilous, often comic journey to rescue his friend from an alternate universe.

Alon Nashman has lived with this play for nearly two decades. He’s performed Shelley Tepperman’s English translation around the world, and now he’s directing this revival and alternating performances with Kaleb Alexander.

If you haven’t seen Nashman as Alphonse, go see him. He brings nuance to his finely honed characterizations and wisdom to the play’s bittersweet truths. But I also highly recommend Alexander, who performed on opening night. While he stumbled over a few words – understandable for so demanding a role – he quickly recovered to deliver a complete, absorbing world populated by vivid characters.

Alexander’s sense of fun is there from the beginning, when he enters (masked), takes us all in, discards his face covering, and in a detail I don’t remember from previous versions, throws his cellphone into the bushes. Yes, this is going to be live, not something you can watch on your mobile device.

Alexander is spontaneous and grounded throughout, reacting to any sound he hears – a loud car, a passerby. But when, as the narrator, he continues the story, there are no distractions.

What’s especially thrilling about his interpretation of the role is how he’s defined each character. Alphonse’s parents have distinct speech patterns – the mother has a West Indies accent, the father has one that seems Middle Eastern – and there’s a hilarious scene in the school in which we meet half a dozen students jostling for attention. His Pierre-Paul René is poised and dignified, while his Walter – Alphonse’s best friend – is a quivering ball of concern.

Alexander’s characterizations aren’t all human. At one point he prowls around like a pack of wolves, and in one of the most enchanting moments, he morphs into a talking, rainbow-coloured vacuum cleaner.

What is so exciting about Nashman’s revival, especially at Memorial Park, is how certain lines take on extra meaning. When one character is quizzed about trees and rivers, it’s hard not to think of the majestic branches hanging over the playing area, or the Humber River thundering nearby.

And a line like “The man who makes noise is a man who is frightened,” while universal, will certainly bring to mind the current U.S. president.

But that’s what live theatre does. Because it’s happening right before us – no screen, no distortion – there’s an immediacy and a connection. To the artist, to the material, to the environment and ultimately to each other.

“What’s that sound?” asked Nashman incredulously when people applauded before his introductory remarks.

It’s the sound of theatre making a gradual, but triumphant, return.