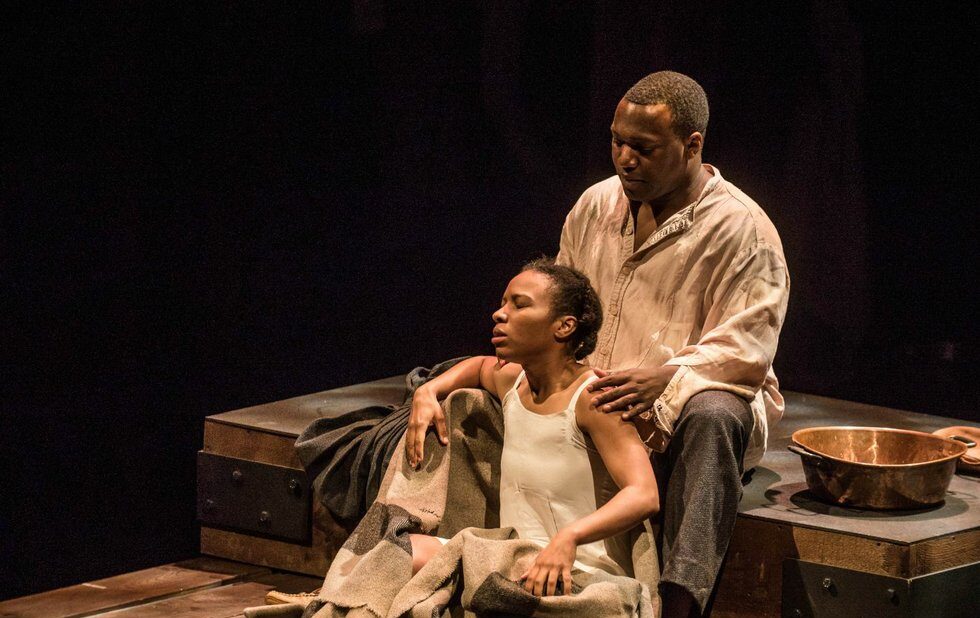 Lorena Gales reimagining of a forgotten moment in Canadian history is a timely and potent reminder of the ways our past remains uncomfortably present.

Angelique, receiving its Toronto premiere at the Factory Theatre, imagines historical events documenting a slave woman who was tortured and hanged in 1734 for setting fire to Montreal. An arrogant entrepreneur Francois (Karl Graboshas) and his wife, Therese (France Rolland), purchase Angelique (Jenny Brizard) after the death of their young daughter. There Angelique encounters Claude (Olivier Lamarche), their indentured servant, and Cesar (Omari Newton), the slave of Francoiss business partner Ignace (Chip Chuipka).

Gales play consciously illustrates the intersecting forces of oppression through the characters who grasp for freedom and happiness by stepping on those with less power.

The political agenda of the play, however, results in uneven character development: Francois is self-consciously exploitative, and Graboshass performance lacks the intensity required to make either his popularity or his lechery credible. Rollands Therese vacillates between implausibly coquettish with her husband but convincingly devastated in later scenes. Newton, on the other hand, manages to quietly evoke both Cesars affection and entitlement for Angelique.

Brizard stands out with the impressive range and depth of feeling she brings to Angelique: from her resigned acceptance of her forced romantic pairing with Cesar, to her rage at Francois, to her animated determination to pursue her own happiness in the face of hatred and violence.

Eo Sharps set design features a central platform comprised of a stationary base topped with a sliding platform, functioning as everything from a sandy riverbank to a gallows, and echoing the political constraints of the characters. Live musicians above the stage add a powerful emotional resonance to the story.

The script makes occasional reference to modernity: Francois asks Claude to take the Mercedes in for servicing, and Therese offers Angelique a vacuum cleaner, but these are so sporadic that they are confusing.

Mike Payettes direction conveys the parallels more effectively in the staging, from Sharps set design, to Angeliques final orange jumpsuit, highlighting that our history of slavery has been re-inscribed within the criminal justice system.