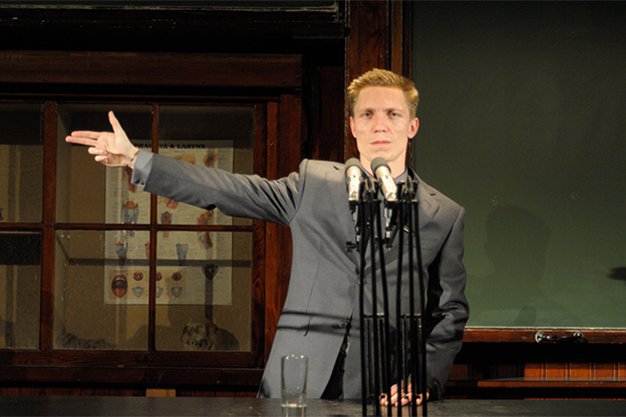 Bigmouth writer/actor Valentijn Dhaenens has terrific presence, but I’m not sure he has a point.

Wearing a grey suit and standing in front of a table with six microphones, he performs speeches or snippets from over 20 orators, spanning centuries, while a blackboard-like projection above him lets us know who’s talking. He does some decent impressions of the speakers – especially in languages other than English (there are surtitles), though he does a creditable Ronald Reagan – but only occasionally is it clear why he’s made his specific choices.

In the canniest pairing, he alternates between Joseph Goebbels trying to inspire Germans to go to war and George Patton working up the troops. Their goal is the same, but Patton is all macho addressing his male soldiers, while Goebbels is soft-spoken and oily pushing his Kinder, Küche, Kirche ideology to his female listeners.

In these moments, you get a sense of the strands connecting the speeches. But elsewhere, as when Belgian King Baudouin abdicates because he can’t bring himself to sign a bill giving abortion rights to women, we have no idea why we should be listening. His speech is not an especially skilled piece of rhetoric.

The funeral oration of Pericles, on the other hand, is superbly constructed, but it, too, has no context. Occasionally Jeroen Wuyts’s soundscape has Dhaenens singing snatches of songs – Smells Like Teen Spirit, We’ll Meet Again – but they offer more texture than background, and the use of America from West Side Story is way too on the nose.

At no time does Dhaenens give any insight into why a particular piece works or doesn’t, so there’s nothing here to learn about speech writing itself.

Not that I was expecting a seminar on how to move a crowd. Besides, Dhaenens is a riveting performer – modulating his tone, rearranging his face to give character – which, most of the time, is enough to make the show entertaining.

But the audience has to work pretty hard to make any sense of it.