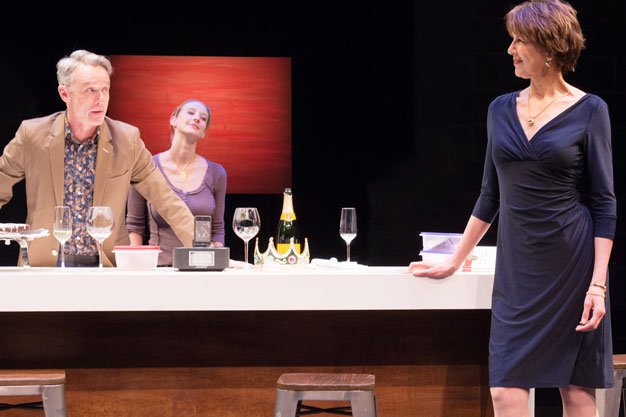 Daniel MacIvor‘s final play as writer-in-residence at the Tarragon is a biting critique of Toronto’s upper class, in which a manic, dysfunctional family with a bad case of affluenza squabble over missing earrings and a bulldozed parkette.

Cake And Dirt centres on Jeff Thomson (David Storch), an immature, self-absorbed lawyer born into money. It’s his 50th birthday, and he’s attending a champagne-fuelled party thrown by his resentful ex-wife Bryn (Maggie Huculak) at her condo, along with their 20-something daughter Riley (Bethany Jillard) and Jeff’s new wife, Naline (Laara Sadiq). Also in the mix are Bryn’s long-belittled live-in housekeeper, Nina (Maria Vacratsis), and their neighbour Jason (Patrick Kwok-Choon), a young city councillor whose support for paving over a nearby park has Jeff seething.

MacIvor presents the action out of order in two acts: the first half shows the morning after the party, when two scenes between Bryn and Nina, and Jeff and Naline hint at lots of drama from the night before. The second reveals what happened at the party, filling in the mysterious blanks and dishing the titular dirt on just about everyone. MacIvor paints a portrait of people who are desperately unhappy despite having every comfort and advantage in life.

The first act consists almost exclusively of bitter back-and-forths over trivial issues, while the party scene expands this dynamic to six people whose multiple arguments fly around the room simultaneously, with Jeff’s sloppy belligerence at the centre. MacIvor displays his skill for fast-paced, fiery dialogue, but by the middle of the party the constant bickering and Storch’s spot-on drunken behaviour begin to cross the line into annoying.

While the conclusion is more intriguing and complete than the cluttered middle section suggests, a certain expected profundity about the wealthy never materializes. Fans of MacIvor will get their fix, but Cake and Dirt won’t be counted among his greatest work.