This play proves there are themes a 50-something, white, male playwright should avoid 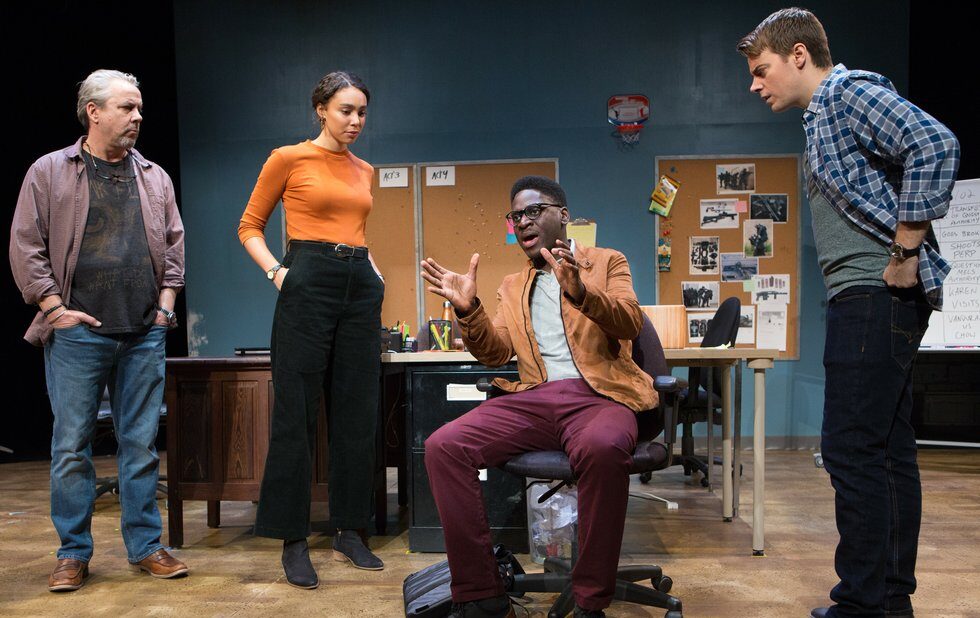 Was there no one on the Tarragon creative team who could save Jason Sherman from himself? The playwright’s hackneyed take on the sexism and racism inside a TV production’s writing room presses all the wrong buttons.

The play opens with showrunner Peter (Richard Waugh) presiding over his staff as they furiously pitch and reject ideas for Hostages, a proposed cop show. The scene sets up the play’s relationships. Young Black novelist Colin (Tony Ofori) has never written for TV. Jewish writer Danny (Jeff Lillico), who has more experience, toadies up to his boss. Biracial Maia (Emma Ferreira), a young film school graduate, is constantly ignored, talked over or mocked.

The plot gets goosed when Colin is assaulted by police while Maia is drunk in the back seat of his car. He wants to use the attack as the centrepiece for the next rewrite. He’s also seeking legal redress from the police – which gives Elsa, still never seen, conniptions – and turns to social media to amplify the assault, which leads to Maia getting mercilessly trolled.

The narrative tricks here are predictable. We’re all ready for Peter, who’s nasty most of the time, to eventually show us a soft side, but via a long speech about how he never got over his first mega-paycheque? I don’t think so. We know Maia’s going to blow at some point but the explosion is unsatisfying because Sherman doesn’t give her much to say.

Even the comic bits are stale. Elsa peppers her irritating phone conversations with instructions barked to her assistant, so she can barely complete a full sentence to the team. There are shades of David Mamet’s ever-disrespectful professor in Oleanna, who’s constantly taking phone calls from his wife about their real estate issues while his student is seeking his advice.

Elsa does eventually appear onstage, suffering from severe back pain. I guess this is a metaphor, but it’s Peter, not Elsa, who’s the spineless one. She gives her own long speech about her motivations, an attempt at something like Ned Beatty’s terrifying monologue in the movie Network.

But Sherman lacks the rage of Paddy Chayefsky and doesn’t have Mamet’s finely honed knack for provocation.

There are crumbs of good writing in the intense sequences where Colin argues with the team about what television is for. Peter, worried about his financial backers, and his toady Danny are all for entertainment and making the police characters “human.” Calling them on their political myopia, Colin makes the case for the urgent need for TV to get real.

But it gets buried under Sherman’s shtick and promotion of toxic stereotypes: the beleaguered white guys complaining about affirmative action (so 90s) the weasely Jewish writer the tough female producer complaining about sexism in the industry, which incidentally does nothing to generate any sympathy for her.

That’s because Sherman plays it all for laughs. Plainly there was no one around to remind him of his privilege. Watching a boss belittle his much younger female colleague is not the stuff of comedy. Neither are Nazi jokes – Elsa, Ilsa, get it? – nor is the boss dropping his pants in front of his co-workers.

Under director Jamie Robinson, the stagecraft is uninspiring, featuring a set of movable parts that form the shabby writing room, Elsa’s office and then her bedroom but the music, which emulates the kind used as a theme for a TV cop show, is clever. And there are good performances, especially from Waugh, who does world weariness and creative panic very well, even if the role is one-note, and Ofori, who grows in both his body and voice from eager know-nothing to principled proponent of truth in art.