Every Day She Rose is an important piece of political theatre

EVERY DAY SHE ROSE by Andrea Scott and Nick Green (Nightwood Theatre). At Buddies in Bad Times (12 Alexander). Runs. 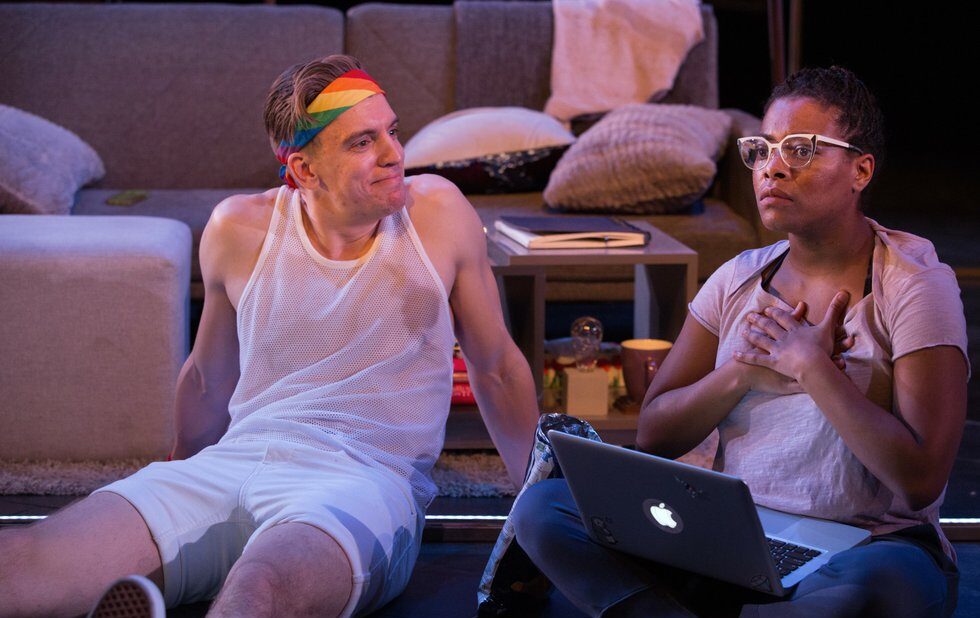 White privilege, racism, homophobia, the purpose of Pride, the meaning of friendship, the creative process in 75 minutes? Really? Yes, actually.

Every Day She Rose flies through its themes, for sure, and, not surprisingly, reaches for its ending, but Andrea Scott and Nick Greens play makes you think and feel and wonder.

Queer white man Mark (Adrian Shepherd-Gawinski) and straight Black woman Cathy-Ann (Monice Peter), both on the brink of 30, have been roommates and besties for years. The play opens with them getting ready for the 2016 Pride parade. Everythings going swimmingly once theyre on site until Black Lives Matter-Toronto activists stop the proceedings via a sit-in on the pavement, making demands for, among other things, no uniformed police at the parade and more space, funds and inclusion for Black participants.

The political intervention has a powerful impact on both of them. Hes angry because he thinks Pride should be one big party, but more seriously because up until he knew what was stopping the parade, hed been petrified a mass shooting of queers in Orlando has made him more than skittish. Cathy-Ann is angry, too shes slowly realizing that racism is not being taken seriously by the queer community in general and her best friend in particular.

What looks like its going to devolve into a two-person exchange of too-familiar arguments becomes something much greater when the duo begin to deepen the discussion to question their friendship. Why cant straight Cathy-Ann understand Marks queer fear? Why cant Mark see Cathy-Ann as a Black woman?

The play adds another dimension when the action stops dead and the two characters suddenly become the playwrights Nick and Andrea, asking their own questions of each other. Does Nick take BLM seriously? Why did he ask Andrea to write with him if he doesnt? Is it a coincidence that male Nick wants to write a play with a linear narrative, while female Andrea is determined to break the fourth wall? How can the play have balance if Mark is portrayed only as a dick?

All of the writing is superb, but the interplay between the writers works best, especially a fast-paced sequence in which they try variations on an argument between Cathy-Ann and Mark. Two playwrights in search of a script sounds a bit insidery, but it doesnt play that way as the artists try doggedly to understand each other for the sake of creation.

The two actors, under the direction of Andrea Donaldson and Sedina Fiati (yes, two directors, too), are excellent. Shepherd-Gawinsky plays Mark as a flaming queer ready to party at any time, swanning around the stage, cracking jokes about sex with strangers yet still making his terror of rising homophobia palpable. He tones it down as Nick, but watch as he agrees to Andreas suggested changes: you can tell by his posture that hes doing it grudgingly and that tensions are rising.

Peter is the stabilizer in the fictive relationship calm, even when angry, until the conflict is two much and also plays it differently as the playwright, with a confidence thats reflected in her movements and tone of voice.

It all unfolds on Michelle Traceys simple but attractive set, featuring a stylized single-line representation of the Toronto skyline outside the window of the apartment.

You could cavil with a few things, like what took two long-time friends so long to deal with issues that have been percolating for years? But dont worry about the premise. Every Day She Rose the title is explained in a lovely, single line late in the play is absolutely of the moment and asks important questions. And that is what theatre is supposed to do.