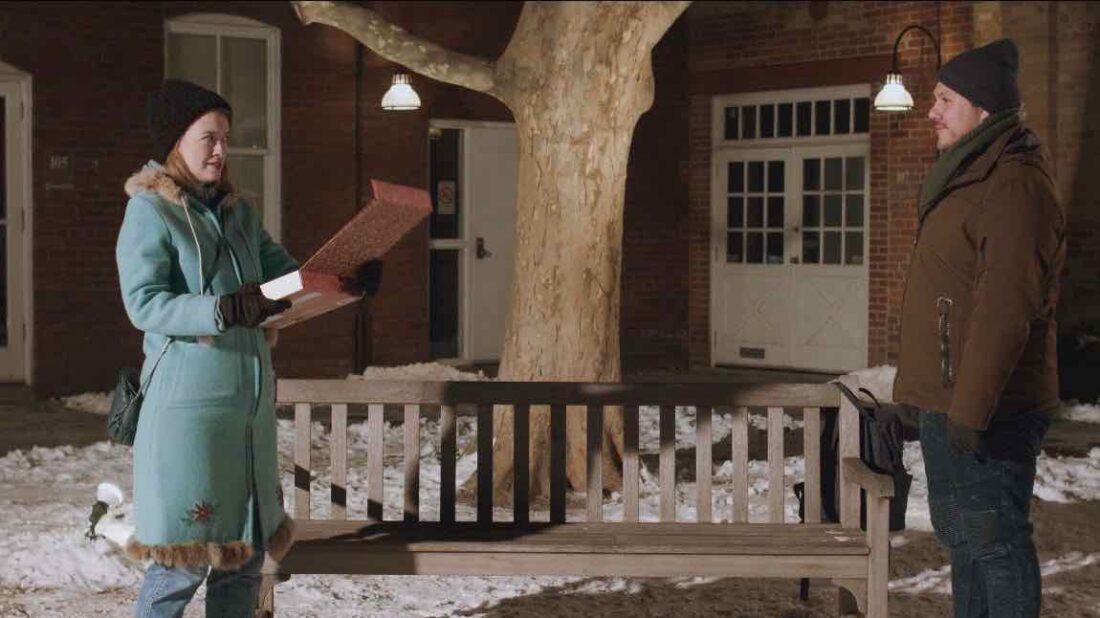 Ellen Denny and Emilio Vieira will make you fall in love with February.

Back in January, I was looking forward to seeing Ellen Denny and Emilio Vieira’s february: a love story, which was all set to get an outdoor, physically distanced production in the Berkeley Castle Courtyard in mid-February.

Well, lockdown number two happened, and live performances were put on hold. But the creators – including writer/performers Denny and Vieira and director Mairi Babb – reconceived the show as a film. And I’m delighted to say that, apart from a couple of overly anxious shots, it works beautifully as a theatre/film hybrid. February: a love story makes perfect post-Valentine’s Day watching.

The set-up is simple. Two unnamed single millennials agree to meet for a socially distanced date in the dead of winter. He (Vieira) wants something meaningful, while she (Denny) is rebounding from a relationship and is looking for a quick hookup. The stakes are high for him because he’s the primary caregiver for his at-risk father. He’s definitely not in the market for a no-strings, and potentially dangerous, encounter with a stranger.

Still, date number two happens, as does date number three, and so on. (Are these even dates, if they want different things?) We get an ingenious flashback to how they “met” – a Zoom birthday party, of course – and soon he’s opening up about the significance of this venue. There’s a wordless scene scored to a jazz number, and a very funny recounting of why Dr. Seuss’s the Grinch is a good role model.

The show’s centrepiece is a magical evocation of a Toronto tradition, recreated by using the courtyard’s few materials in an imaginative and fresh way.

By making a film set over several weeks, the artists get to suggest different times of day for the encounters, which would have been harder to pull off in live performance. Apart from a few overly eager editing cuts early on (Anthony Brancati and Madison Wood are credited as editor, with Ryan McIntyre director of photography), the piece works well.

Babb mixes up the rhythms of the show by having Denny address the camera/audience several times, and that flashback Zoom party sequence is bookended with another funny scene, a video sequence of something many of us have become accustomed to during 11 months of isolation.

Vieira, who’s been in such shows as Towards Youth and Much Ado About Nothing, brings heart and soul to his charming romantic who wants to fall in love. And Denny, nominated for a Dora Award for her moving performance in the musical Life After, delivers her snappy, cynical lines with bite, suggesting a person who wants only to numb her pain.

The two clearly demonstrate that they’re not only gifted actors but also talented writers. Much has been written about loneliness and dating during the COVID-19 pandemic, including a NOW cover story.

February: a love story is one of the most effective and poignant depictions of two young people looking for love I’ve seen. The film works beautifully, but I hope it gets a live local staging soon. (It’s heading to Bobcaygeon’s Lakeview Arts Barn later this month.) It deserves a long life, even after we’ve all put away our masks – at least our physical ones.