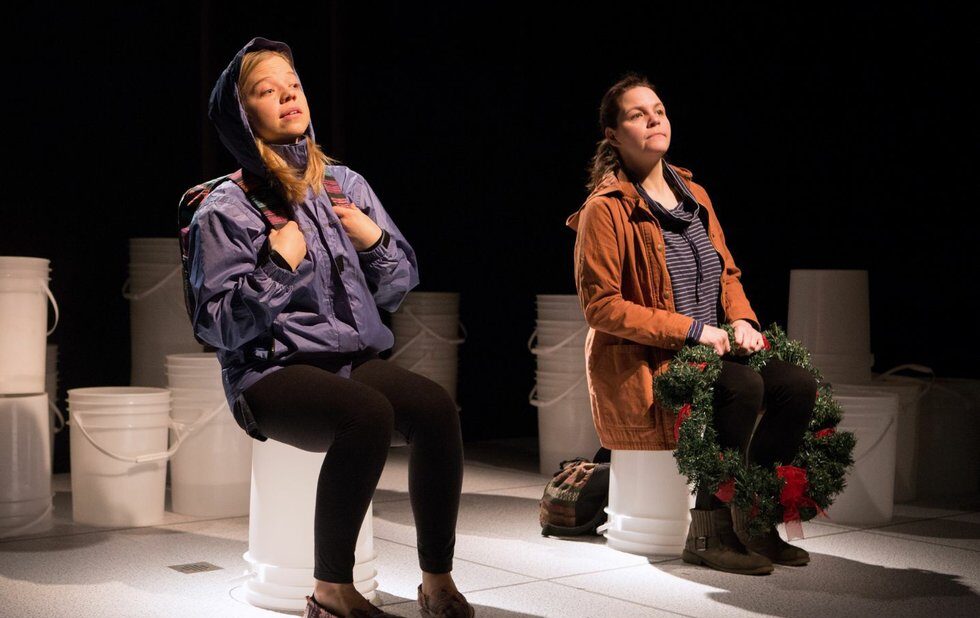 Four female characters and a bunch of buckets. Thats not much to work with.

But put them in the hands of a skilled playwright like Charlotte Corbeil-Coleman and the result is a moving exploration of the lives of women surviving in a maximum security prison.

The plays content is driven by Corbeil-Colemans conversations with women who have been imprisoned or have worked in corrections. It opens with the Guard (Columpa Bobb) placing several large pails on the stage, two beside each other at the centre. Brit (Virgilia Griffith) enters, followed by Sid (Vivien Endicott-Douglas), who sit back to back.

In short scenes separated only by a slight dimming of the lights (designed by Andre du Toit), they get to know each other, gradually developing a close friendship as Corbeil-Coleman hints at complicated relationships between the women and their mothers.

Throughout, the Guard, humming the same tune, places buckets all over the stage, occasionally pausing to remove an object, presumably a treasure taken from an inmate whos entered the prison.

Corbeil-Coleman gives texture to the characterizations. Though Brit has been incarcerated for a crime she didnt commit, she remains easygoing and optimistic, while Sid is moody, angry and able to give personal details only when shes playing a game pretending to be someone else. Shes especially tight-lipped about why shes in jail, though we do finally get a glimpse of what happened.

Then the lights come up on Kit (an electric Michaela Washburn) alone, talking to herself as she showers, in an extended rant about how desperately she wants to see her daughter. When she gets a letter from her, she begs the Guard, still a shadowy figure, for a pen and paper. Then Kit makes a decision born out of desperation.

The final segment features three young girls (performed by the actors who played the inmates), each related to the prisoners in ways I wont share. Let me just say that they are complicated, and the fact that Corbeil-Coleman can convey these complexities so clearly and pull these threads together speaks to her skills as a dramatist.

The actors, under the direction of Richard Rose, are excellent, Griffith all sunny until she learns a difficult truth, and Endicott-Douglas an actor who can seamlessly transform from furiously disruptive enough to prompt the Guard to throw her into solitary confinement to a shuffling, diminished mass once she re-emerges. Washburn gives the piece an energetic charge when she hits the stage. All three change completely when theyre onstage as younger girls.

Bobbs Guard at first appears hardened but does sometimes show some empathy. She has almost no lines until a final monologue, exquisitely rendered, that makes key connections between her and the inmates. Its a genius touch.

Indeed, the plays the thing. The first section is a bit long, but the piece builds spectacularly, touching on issues of trauma and the cycle of violence without any gratuitous content and without exploiting the women Corbeil-Coleman listened to so carefully in preparation.

She simply gives their stories life and potent dramatic force.