NOW MagazineCultureTheatreSexual Misconduct Of The Middle Classes is a class act

Sexual Misconduct Of The Middle Classes is a class act 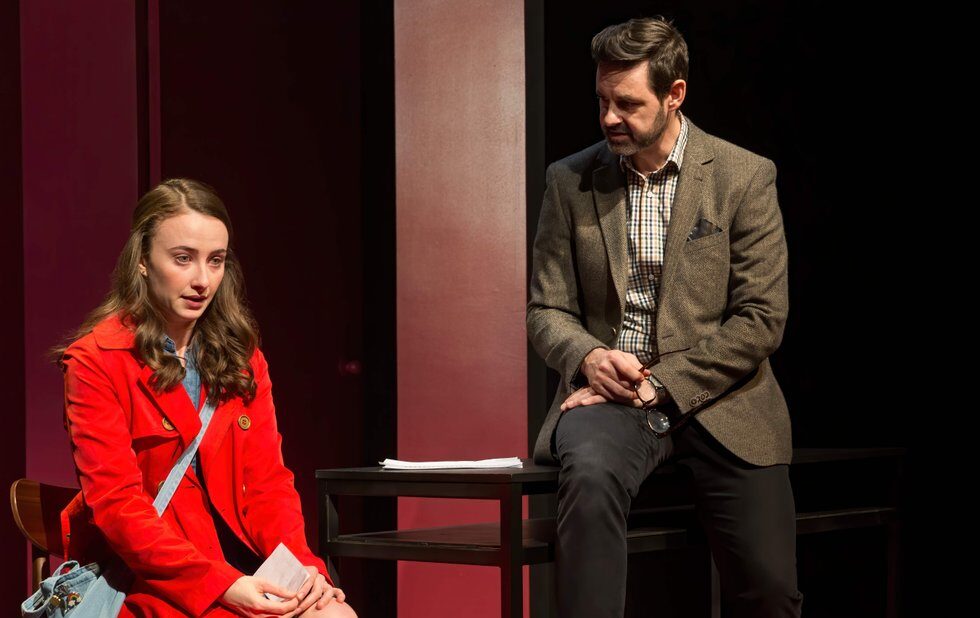 Promo materials for Hannah Moscovitchs Sexual Misconduct Of The Middle Classes declare that the play turns the scenario of teacher-student romance on its head. Not quite.

Writing professor Jon (Matthew Edison), famous for his novels, is full of loathing for his students, but mostly for himself, as he lectures on auto-pilot, expresses resentment for the young people around him and bemoans his priapic behaviour and his search for middle-class status.

Along comes superfan Annie (Alice Snaden), the girl in the red coat a clever twist on all those The Girl-titled thrillers who comes on strong until Jon cant resist. Nothing much new there.

What is new is that the story, until the last line, is told from the perspective of the prof. Its close to a monologue, except that he speaks in the third person for reasons that become clear at the plays end, while Annies dialogue takes up maybe 10 per cent of the run time.

Moscovitchs strategy is to make us sympathize with Jon, even after the affair begins, and later, when Annie has misgivings and suggests to him that their relationship has a power imbalance. This confrontation blows Jon away and might make #MeToo doubters wonder: Weve seen him almost stalked by his star-struck student, who may also be looking for someone to advance her own literary ambitions.

All this works because Moscovitchs writing is so smart never has the expression Yeah been used so effectively. Jon, tweed-clad and sneaker-shod is as much funny as appalling and, even though Moscovitch plainly understands his privilege, her whole point is to make it seem as if something is happening to him. The narrative gently shifts when he rents a room in a sleazy hotel for his next tryst and Annie changes her attitude.

Director Sarah Garton Stanley keeps the two-hander from becoming static, constantly moving the actors and the sets single table and two chairs around. Thanks to designer Michael Gianfrancesco, Jon goes in and out of three doors on each side of the stage as he talks to the audience, giving the impression of a man whos always had doors opened to him. Annie, the one whos on the outside looking in, makes many of her entrances from outside the theatre.

Edison is a marvel, able to pull off the difficult task of making us worry about a man doing the wrong thing. He expresses bafflement, dismay and anger on a dime, pacing the stage like a caged animal, his body suddenly slouching when hes hurt.

Snaden has far less to do and, I think, could change her demeanour more as the play progresses. As it is, she relies on Moscovitchs dialogue, rather than her physical presence, to express her inner transformation.

But thats just fine when youre working with first-rate material from one of Canadas best playwrights. Shes the star here.