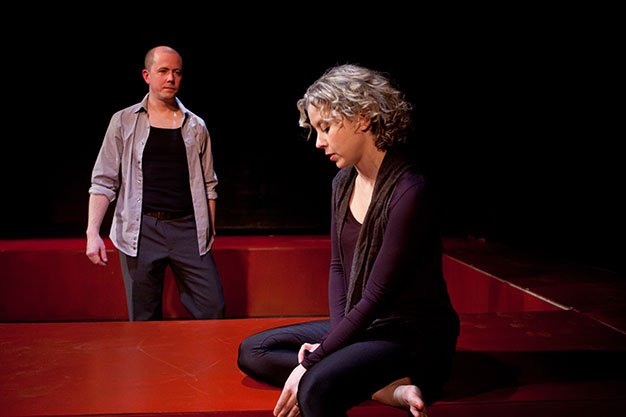 What keeps a marriage alive? Does it require fidelity? Do women and men relate to each other in different ways?

Daniel Karasik’s excellent, suggestive Little Death explores these questions and others in the tale of Alex (Christopher Stanton), diagnosed with a life-threatening disease, who asks his wife, Brit (Nicole Underhay), if she’ll give him permission to sleep with other women. She does, reluctantly.

The play, which won Karasik a place in London’s prestigious Royal Court Theatre’s young writers program, alternates scenes in which Alex connects with different women, often in hotel bars, with others in which he and Brit continue a dialogue about what his actions are doing to their marriage.

We also meet the aggressive, flirtatious Diane (Shauna Black), the young and somewhat naive Liz (Elizabeth Tanner) and the maternal and still sexy Claire (Kate Hennig), as well as Marsha (Sarah Dodd), who has a totally different kind of relationship with Alex.

The scenes between husband and wife are the production’s richest. The two often start on a calm note but soon become angry and bitter, Stanton not giving much away about what’s going on inside Alex’s head and the marvellous Underhay suggesting all sorts of moods beneath her words. She fully embodies Alex’s comment that Brit “never say[s] anything these days that doesn’t mean four things at once.”

Black makes Diane a worthy catch for the night, clever and sensual, while Hennig’s Claire has an earthy laugh and an understanding of her own needs as well as Alex’s. Dodd has a different kind of wisdom to impart, surprisingly to Brit rather than Alex. Only Tanner’s Liz isn’t fully drawn, a problem both with the character and the performance.

But the action keeps returning, as it should, to Alex and Brit. As she alternately forgives him and tries to rescind her permission for him to sleep around, Brit keeps wishing that their lives could go back to when they first met. His scenes with the other women suggest that Alex’s boyish charm is still just beneath the surface.

But will they ever be apart, even given Alex’s mortal illness? The play ends on a touching fantasy note, one that binds them together in health and sickness, this life and all others.