Review: My Dinner With Casey Donovan 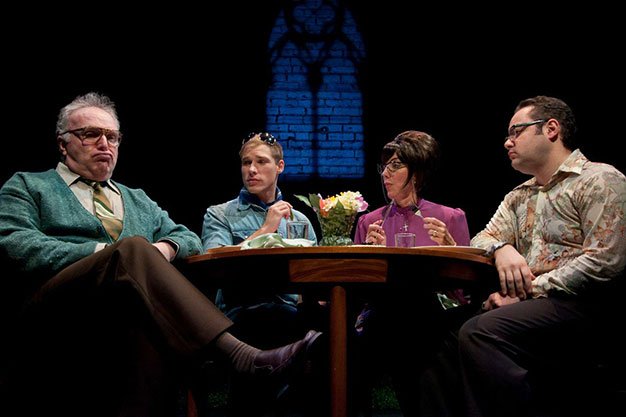 Sky Gilbert’s slight new play concerns the latter, and it’s set in 1973 Norwich, Connecticut, long before reality TV. The gay but not out Calvin Limehouse (Michael De Rose) has invited the cool, smoothly confident actor (Nathaniel Bacon) – whom he met modeling clothes at a convention – to dinner with his uptight Lutheran parents.

After an awkward, exposition-heavy beginning in which Calvin continually screeches his disbelief and Donovan (whose real name, it turns out, is Calvin, too – an idea that’s left unexplored) blithely breezes up and down the Passe Muraille Backspace stairs, decked out in Sheree Tams’s snug period costumes, the stage is set for a farce about repressed sexuality that could shed light on today’s red state-vs.-blue climate: Guess Who’s Coming Out At Dinner?

What follows is the best scene in the play, particularly when Calvin’s mother, Rita (Elley-Ray, the actor formerly known as Elley-Ray Hennessy), talks. It’s a fascinating performance: sweet, smart, not played for laughs. When Rita and Casey hit it off discussing art and culture, Gilbert suggests a lot about roads not taken. And when the two are alone together, in a contrived set-up, there’s a poignant scene in which Rita reveals her fears for her son’s happiness.

Certainly that dialogue is more interesting than Calvin’s father Charles’s (Ralph Small) fishing around to see whether Casey is gay, or Calvin’s paroxysms of awkwardness at his parents.

One of the main problems with the script is that the characters are so thin. Calvin seems to have no motivation or inner life. And the way Gilbert directs De Rose doesn’t allow the actor to hint at any other layers.

The final scene’s descent into melodrama is lurid and watchable, but betrays everything that’s come before. Both the staging and the set, dominated by two trees hide things behind them, are awkward.

And even Gilbert’s pedantic references feel off. He has Casey moon expound about the Bellini aria Casta diva, but Puccini’s Vissi d’arte would have been much more thematically appropriate, given the little we know about this character and his aspirations.