A body, a mystery and memory issues weave together in a tricky piece of storytelling 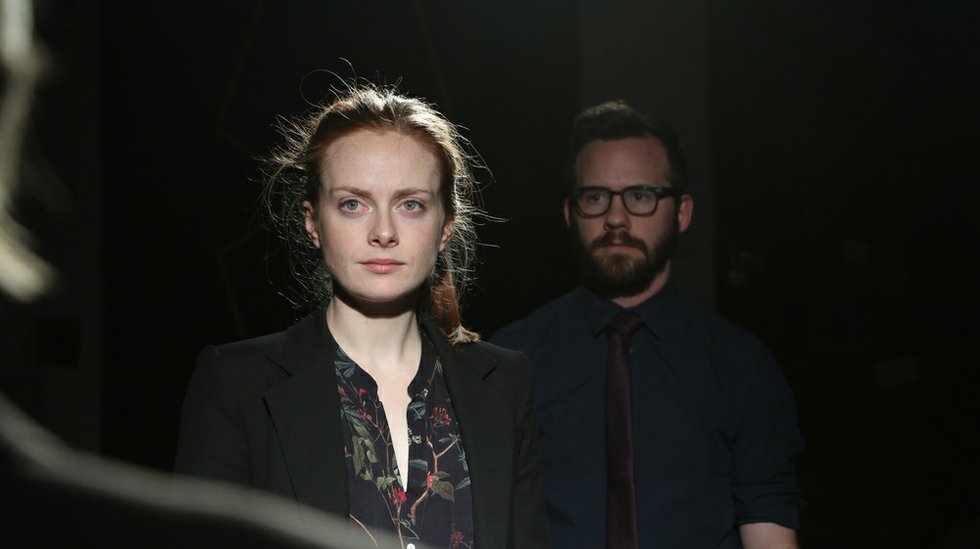 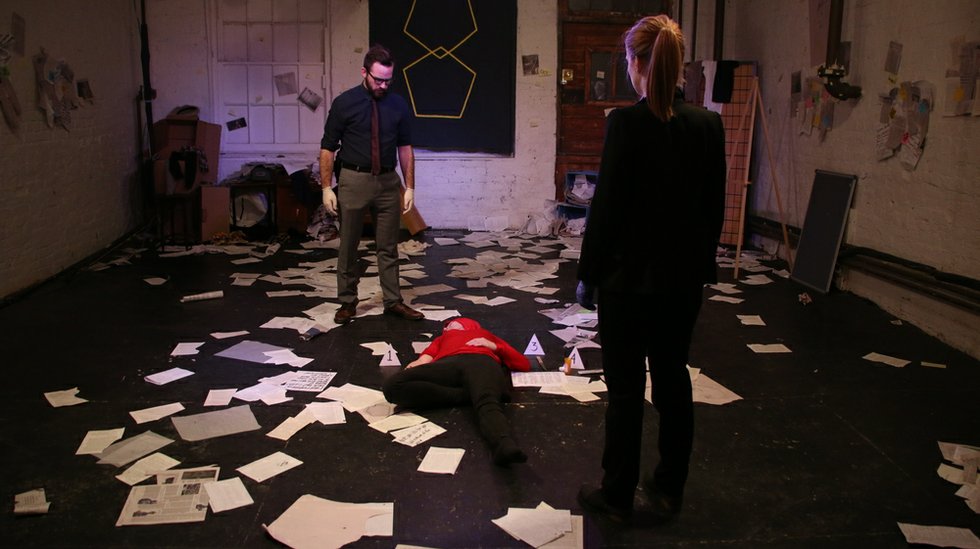 You enter a room and discover a red-hoodied body on the floor, a knife and a pill bottle next to it papers are strewn all over the place and there are strange collages pasted onto the walls.

This is the set-up for the collectively created Slip, the latest by Circlesnake Productions, which creates theatre in a collaborative and improv fashion.

It’s up to Toronto detectives Mark (Daniel Pagett) and Lynne (Alex Paxton-Beesley) to deal with the mystery of body and how the victim died. We learn that corpse is that of Jane (Mikaela Dyke), and over the course of the 70-minute show, other facts about her family and her relationships come to light.

The time leaps in the script, all well handled under Alec Toller’s direction with the help of Melissa Joakim’s lighting, reveal not only Jane’s tale but also that of Mark and Lynne, in some ways more textured than that of the victim. The play feels most solid when it focuses on this pair.

At first, repeatedly using a device that begins “tell me a story,” the detectives offer possible explanations of Jane’s history, scenarios that could account for what they’ve found, which includes other pill bottles, track marks on her arm and the recurrence of pentagon shapes around the room.

In fact, the play’s scenes often loop back on themselves, retracing the action and making us reconsider what we’ve seen and heard. Memory, we discover, is a key theme in the show.

Lynne and Mark clearly revel in scoring points that credibly relate to the crime scene, but the scoring isn’t only about establishing a possible framework for what they’ve found they also enjoy playing off each other and winning a game. Mark’s the lead detective, though he’s not sure he wants to be, and Lynne suggests that she’d make the better head.

We eventually learn a back-story that shows why she’s not, and it’s tied up with some important narrative and character points that I won’t spoil. The same is true of Jane’s history, and the links between the two plots are suggestively teased out by the show’s end.

The other performers – Dyke, Anders Yates and Paloma Nuñez play a number of roles – help fill in some of the blanks, though at times the narrative is unfocused and could use some tightening and editing.

Still, a number of the scenes are riveting, including a back-and-forth confrontation between the detectives combined with an earlier police tribunal, and another in which Mark alternates between castigating Lynne and complimenting her.

And there are some terrific performances by Paxton-Beesley and Pagett, who generate a chemistry that resonates even more strongly given the venue’s intimacy. Paxton-Beesley nicely balances Lynne’s forthrightness and insecurities, while Pagett makes a sympathetic friend and co-worker, both worried about Lynne’s personal problems and admiring of her professional skills.

The two play comedy – there’s a great exchange about Mark’s new partner – as expertly as they do the more serious material.