Young Jean Lee's play about white male privilege and entitlement makes its points, even though the premise feels contrived 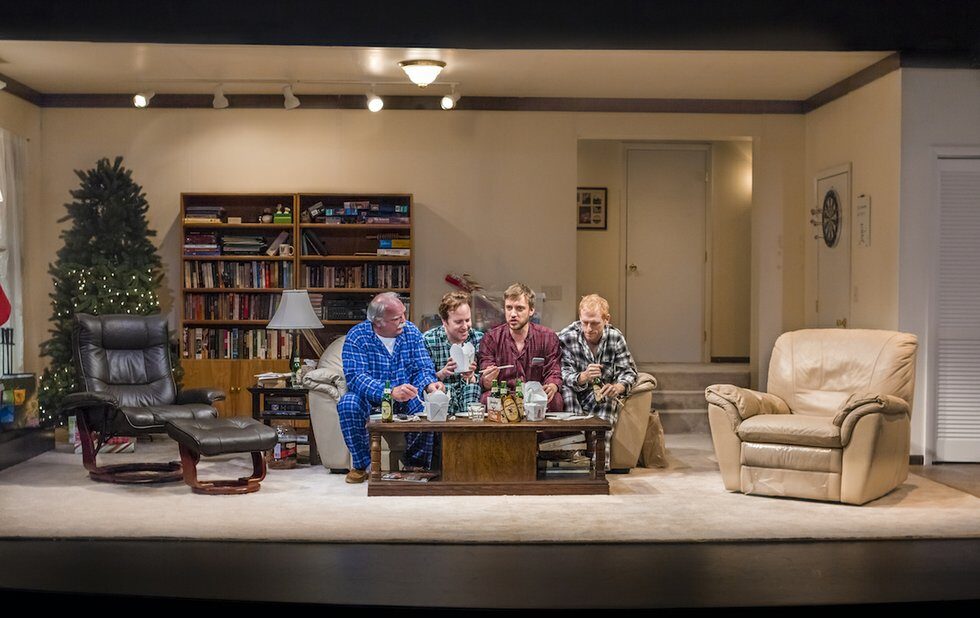 The young Korean-American playwright Young Jean Lee has confronted race, gender and genre before in her fascinating shows The Shipment and Untitled Feminist Project, both of which played at World Stage.

Now comes Straight White Men, which, as its cheeky title suggests, touches directly on the idea of white male privilege and entitlement. It’s a fascinating name, and begs the question: Couldn’t most plays being produced in North America be called that? Don’t SWM have enough depictions in TV, film and theatre?

Perhaps, but sometimes it takes an outsider to have a fresh perspective on an old, entrenched topic.

Performed on a realistic set that’s surely the most naturalistic ever to take up space at the Fleck Dance Theatre – complete with family room La-Z-Boy, shag carpet, off-white leather (or vinyl?) sofa and coffee table sturdy enough for feet resting, beer bottles and a well-thumbed X-Box controller – the 90-minute show takes place over the Christmas holidays in the home of Ed (veteran character actor Richard Riehle), a retired engineer, and his three sons. My Three Sons: get it?

The brothers, edging towards middle age, are a mixed bunch. In order of increasing age, there’s Drew (Frank Boyd), a novelist and professor, Jake (Patch Darragh), a hard-nosed banker, and Matt (Scott Shepherd), who’s moved back home with his widowed dad and is working as a temp at a socially-conscious organization.

The three play around, high five, brag, boast, bond and gently humiliate each other… the kind of things straight bros, even literal ones, tend to do. But when one of them breaks down over an informal Christmas dinner of Chinese take-out (eaten directly from cartons, naturally), the equilibrium in the family is upset. And suddenly there’s the opportunity for some genuine self-examination.

Lee’s play is skillful and funny in bringing up lots of questions about how to navigate, with appropriate sensitivity, the various minefields of identity politics. Nowhere is that clearer than in an early scene in which the boys play a game called Privilege, a bastardized version of Monopoly. It was apparently the brainchild of their mother, who remains a frustratingly mysterious presence who hovers over the play.

But perhaps this is what Lee’s getting at.

Despite solid performances, especially by Shepherd (who was so good in the Wooster Group’s Vieux Carré a couple of years ago), and Darragh, the most fascinating parts of the play are the moments between the scenes, when stagehands – who include a black woman and a man with an earring – come on and tidy up the room.

Here are several extended examples of other people cleaning up the messes of straight white men. Same as it ever was.