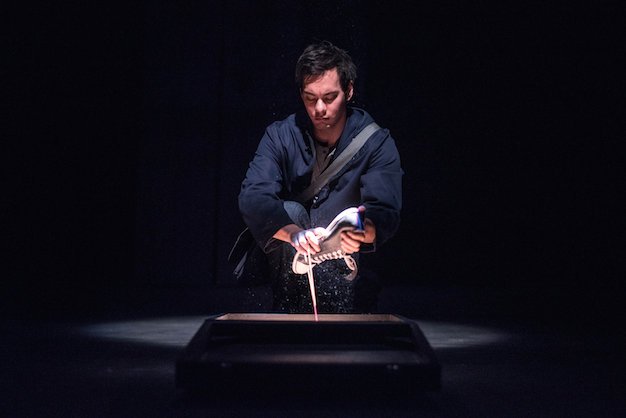 Intergenerational family patterns, including violence and an inability to communicate, are the subject of David Yees thoughtful, moving acquiesce.

Its central character, successful Canadian-Chinese author Sin Hwang (Yee) well, hes written one well-received novel finds himself, following the death of his father, on a trip to Hong Kong to deliver documents to his cousin, Kai (Richard Lee).

He finds that hes travelling with more than papers: his fathers body is in the cargo hold, and Sin discovers that hes required to follow a ritual mourning and deliver a eulogy for the man he hasnt seen in 15 years, nor been close to for years before that. We eventually meet Sins father, Tien Wei (John Ng), and discover the reason for their difficult relationship.

The script moves back and forth in time and place, the Canadian scenes involving Sins girlfriend, Nine (Rosie Simon), from whom hes kept secrets and emotional problems he doesnt want to face.

Nina Lee Aquino directs with her usual strong sense of theatricality, the characters hinting at feelings they keep buried until those feelings erupt in anger or sadness.

With touches of magic realism, fantasy and eccentric comedy a Paddington Bear doll comes to life, and a quipping Buddhist monk (Ng in one of several well-performed, contrasting roles) revels in stand-up groaners the play examines the connection between father and son from all sorts of angles.

But thats not the only key relationship in the play. The self-denigrating, sarcastic Sin and the regimented, by-the-book Kai, temperamental opposites, have to find a middle ground on which they can relate to each other. Playing off Yees seemingly nonchalant but really distressed Sin, Lee offers one of his finest performances.

Theres also, though it only comes up occasionally, the strained link between their deceased fathers, whose history echoes the tension between the cousins.

Not all of the plays elements succeed. Nine is two-dimensional until halfway through the second act, and the elements of Buddhism could be further developed in terms of Sins growth.

As the title suggests, acquiesce is about Sins reluctant acceptance of whats asked of him, a letting go of patterns he (and his cousin) have followed, but also an acknowledgment of what made those patterns and why they have to be relinquished.

Sins journey, rich and emotionally sensitive, finishes at a moment when he looks at both past and present, not only seeing but also, possibly for the first time, understanding and accepting who he is and what he might be.