Review: The Brown Bull Of Cuailnge

THE BROWN BULL OF CUAILNGE by Neil Wechsler (The Room). At the Sidemart Theatrical Grocery (1362 Queen East). Runs to. 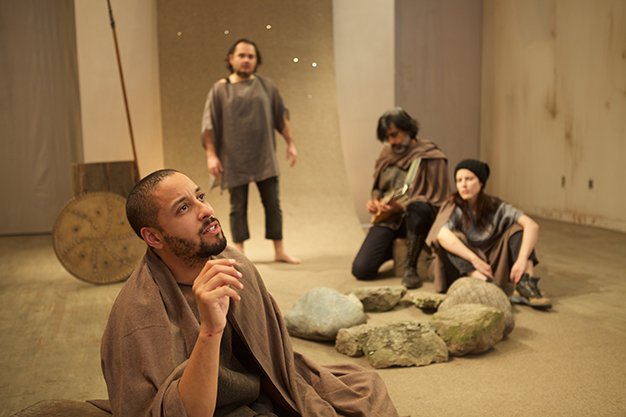 Myths and their resonance across time are a hot topic on Toronto stages.

First Paulo And Daphne gave a contemporary spin to the Greco-Roman story of Apollo and Daphne, and now The Brown Bull Of Cuailnge riffs on the Irish legend in which Queen Mebh battles for the impressive stud bull of the title.

Neil Wechslers play doesnt look at the tales heroes but rather its foot soldiers: a quartet of warriors on a lonely night in the field, separated from the rest of their troop.

Their leader is Fergus (Dylan Roberts), who his men claim couldnt couple with Mebh ignoring them, he affirms that his only love is his faraway wife. The other three are Ath (Antonio Cayonne), who desperately wants a woman, the poet Brug (Anand Rajaram) and the young, naive Muirgen (Gabriella Colavecchio, playing a male role), still learning what this war and this world are about.

The four, who have been lost for what might be 10 days or possibly 10,000 years, recount their stories over and over as they try to sort out the past, present and future. The idea of the tale is key here: what is the value of a story, how does it define us just as we define the narrative by telling it. In this play, a myth is more than a grand yarn its also human and personal.

Director Geoffrey Pounsetts engaging production captures the ambiguities of the text as well as its lessons and laughs. This universe is one of contradictions the facts we are told are both true and not true, reliable and unreliable the four men are always together and always alone, at the same time. Its that both/and complementariness that infuses the play with intellectual and emotional power.

Performing in Andjelija Durics set, which emphasizes the stars that hover above the action, the actors nicely define their nuanced characters. Rajaram, who provides much of the shows humour, infuses Brug with the flair of a performer, someone who likes his dramatic flourishes as well as his inventive lists that categorize everything from the cycle of human life to the variety of cricket songs. Cayonnes Ath, good at math, enjoys riling Fergus and arguing with him. Colavecchios childlike Muirgen grows more wise over the course of the show until he can separate from Fergus, his metaphoric father.

Roberts gives the production its focus as their leader, who disbelieves the poets and the storytellers and would like to live without them. Still, knowing that he and his men are bound together for eternity through words about battles and bulls, he acknowledges their power.

Pounsett handles the tensions between the characters well, building up dramatic pressure and then easing off from it. Though the writing is sometimes loosely structured and occasionally hard to follow this is a play that would benefit from more than one viewing the production underlines Wechslers tantalizing ideas about myth and human interconnection. Youll leave the theatre with your head full of ideas to ponder.

Neil Wechsler The Room The Tain