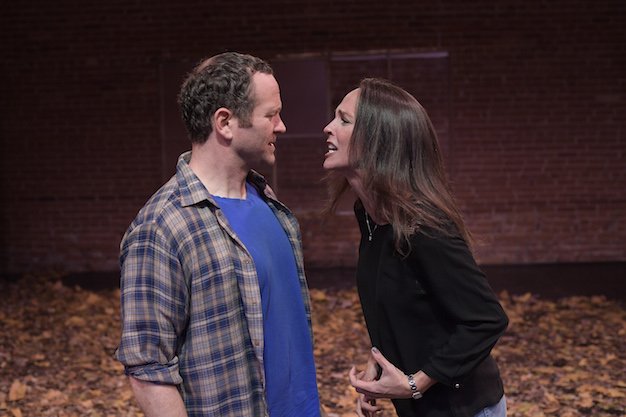 Audiences first met the Toronto east-end Toronto pair as teenagers in Tough and later Moss Park, with Tina pregnant and the two uncertain what to do. In The Damage Done, they return as grown-ups to the same park where we first saw them nearly two decades earlier. Some superficial things are different, but the core nature of their relationship is unchanged, including their regular and seemingly inevitable recriminations and arguments that probably began in kindergarten.

Tina (Sarah Murphy-Dyson) has married another guy and moved up socially and economically. She’s now a social worker and living in the burbs with the two daughters she shares with Bobby (Wes Berger), while he’s still caught in dreams, schemes and disasters. His latest plan: to be a playwright, his script based in part on their history. (In fact, what we hear of it sounds like a very George F. Walker-ish script.)

At first it seems she has her life pretty much together, while he’s the aimless one in fact, as the play goes on, Tina emerges as the less anchored person, needing her ex to step up and care for the kids while she pursues a way to “heal her spirit” and forget memories of a difficult past.

Walker’s trademark humour, partly sarcastic, is present, though a strong sense of melancholy permeates the work. Tina’s the better-defined character, while Bobby is most in focus when he’s angry and passionate about something.

The pair know each other really well, refusing to admit the weaknesses the other exposes and explores. But sometimes their pattern of a brief connection followed by a pushing away feels repetitious.

Director Ken Gass’s long-time relationship with Walker makes him familiar with the playwright’s world and lets him to evoke these characters not only through their words but also their speech rhythms, emotional tones and physicality.

The reading that the actors and Gass provide the play’s last few lines is subtly evocative. It starts with a sense of comedy and hope before striking a different note entirely. Only then do you realize that Gass’s set, a rectangle of fallen leaves that fills the intimate Citadel space with the musty smell of a season’s ending, has suggested from the start that Bobby and Tina’s conversation won’t be one of expectant renewal.