NOW MagazineCultureTheatreSavvy The Election evokes the passion of political volunteers

Savvy The Election evokes the passion of political volunteers 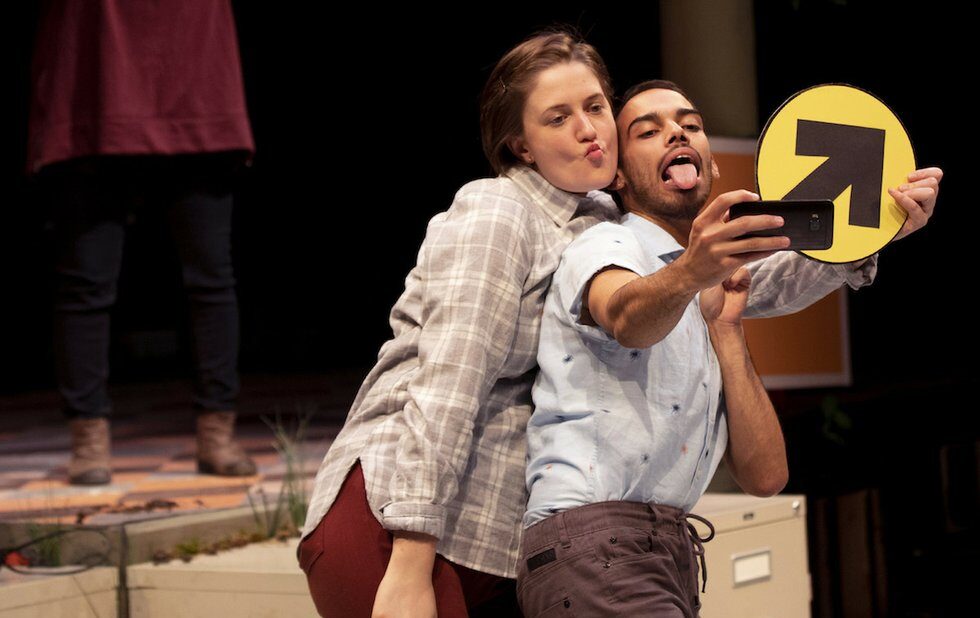 Resist the urge to mistreat those canvassers trying to get you to vote for their candidate. They are wholly committed, work way too hard and have almost no control over the message theyre bringing to your front door.

This is the basic premise of The Election, Natasha Greenblatt and Yolanda Bonnells play inspired by the real experiences of activists volunteering for political parties during the 2015 election. The six-person ensemble evokes an array of characters, including campaign operatives, their families, political bosses and, once in a while, politicians like Doug Ford, Justin Trudeau and Kellie Leitch.

The play begins with a sublime land acknowledgement, penned by Indigenous playwright Bonnell, which takes the standard acknowledgement thats often read without context and elevates it into a choral poetic wonder.

From there, the play bursts into a political free-for-all representing all political parties and shifting from the North to Torontos suburbs and its downtown core.

A key theme is the extent to which the volunteers struggle when their parties go too far or not far enough. Augusto Bitters queer Conservative keeps silent when he encounters a Christian homophobic Harper fan, but ultimately cant bear it when Kellie Leitch weighs in with her toxic snitch phone idea.

Zoe, played by Rachel Cairns, has been an NDP supporter all her life but cant understand why the partys platform ignores the environment and wont take a stand against pipelines.

Not everyones so gung-ho about the electoral process. Anand Rajarams Samraj gets involved in the Liberal campaign because his mother (Rose Stella) thinks he needs to do something more with his life. Sky (Joelle Peters) is wholly alienated and is hanging Dont Vote signs all over her reservation. Conservative Landon (Courtenay Stevens) doesnt seem to be interested in anything but sports.

The show, thanks to director Jennifer Brewin, has lots of energy, with actors turning on a dime to change the set and their characters. Working with Common Boots co-artistic director Alex Bulmer (who served as accessibility dramaturg and contributed to the script and voice work), the director ensures each character is introduced from off-stage every time they enter. Its a necessary device for the visually impaired, given that these character shifts are represented by the slightest of costume changes, and, since it never takes away from the flow of the piece, demonstrates how seamless this kind of accommodation can be.

The writing at times is superb, especially the land acknowledgements a second one after the intermission treats the planet as a wounded creature and a rapid-fire door-slamming sequence in which beleaguered canvassers get an earful from impatient voters. Also strong is a confrontation between Zoe and Skye over whether anything any of these volunteers is doing makes a difference, and a tender sequence in which Samraj shows his appreciation for a grieving colleague.

The performances themselves dont always measure up to the material.

Theres a sameness to Stellas two elder characters, and Bitter sometimes delivers his lines too quickly to be heard. But Stevens ably captures the creep factor in Zoes boss Jake, Rajaram shows great range, from his hilarious harried parent to his Doug Ford impression, and Cairns, the best of the bunch, is terrific as the exploited NDP volunteer and a cutthroat Tory campaign manager.

Theres lots to laugh about here, including a running joke about the TV commercial Samraj has appeared in and the occasional reports on the ever-changing polls. And since plenty has changed in four years, promises made in 2015 electoral reform, anyone? read much differently now than they did then.

But the level of commitment of political volunteers doubtless remains unchanged. So if youre not interested, say so. Just dont slam the door.

Correction (October 15, 2019): An earlier version of this review incorrectly identified Common Boots Theatre co-artistic director as a Deaf community consultant. This version has been updated. NOW regrets the error.