Crafty show proves politics and art can be a great mix 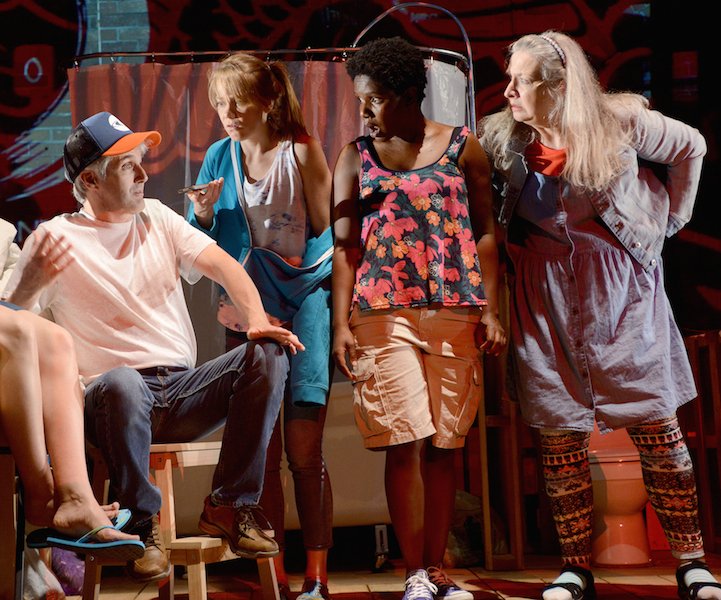 Politically conscious works of art can often be so earnest your eyes could roll out of their sockets.

But Annabel Soutar has figured out a way to make real-life eco-passion and political intrigue consistently gripping.

Annabel (Kristen Thomson) has been commissioned to do a play for Panamania, the cultural component of the Pan Am Games. Her subject is water, but soon it blossoms into a full-on investigation of the Harper government’s de-funding of the Experimental Lakes Area – a series of research stations involved in environmental assessments of Canadian fresh water. Along the way, she slams the Conservatives’ anti-science agenda and Harper’s controlling ways.

Could be dull as dishwater and Soutar’s strategy of using dialogue lifted directly from actual interviews doesn’t sound like it could be the basis for compelling theatre.

But it is, thanks to three main factors. Annabel engages her entire family in the project, including her husband (Alex Ivanovici) and her two daughters, eight-year old Beatrice (Ngozi Paul) and 10 year-old Ella (Amelia Sargisson). Soutar’s portrait of family life is vivid, very realistic and often hilarious. Conversations between emerging eco-activist Annabel and her conservative capitalist dad (Eric Peterson) are intriguing, though the last one is a bit too didactic. And just when you think we’re getting too much data, we’re back with the rollicking family.

Soutar’s cast, under the skilled direction of Chris Abraham, is tremendous, all of them, save Thomson (who expertly embodies Annabel’s passion, intelligence and frustration), playing multiple roles, often of real life characters – Bruce Dinsmore nails his impression of Harper. Sargisson and Paul show impressive range, evoking their kid characters and various adults with precision.

And the stagecraft – set, costumes and props by Julie Fox, lighting by Kimberly Purtell, sound by Thomas Ryder Payne and projections by Denyse Karn – is stunning. The actors are consistently moving scenery and transferring props to one another in ways that look almost choreographed, facilitating the cast’s fluid character shifts. The same platforms that function as daises and furniture in the first act are miraculously transformed in the second act into the Winnebago the family drives to Fort McMurray.

The result of all this is great theatre – brainy and heartfelt.