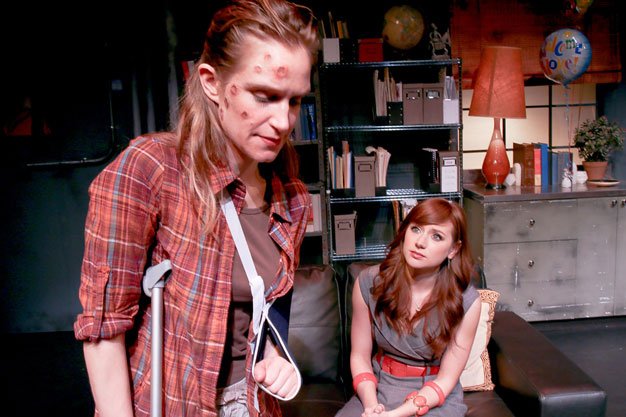 Remounted after its success at last year’s Fringe, Time Stands Still is that rare thing: a serious drama that tackles big issues like love, war and how to live an “important” life.

Sarah’s photo editor and former lover, Richard (Sam Rosenthal), wants the couple to collaborate on a book she’s keen, but James is hesitant. And then there’s Richard’s much younger girlfriend, Mandy (Carleigh Beverly), an event planner who doesn’t share their cultural references or passion for journalism but has a shrewd take on other topics.

Jordan Merkur has expanded and developed his fine, clear production of the Donald Margulies play. It’s now divided into two acts, with a few more grace notes that add texture. There’s a firmer sense of the three journalists’ friendship, and the inclusion of lines about assuaging liberal guilt makes the work more complex.

This is a play whose effects are cumulative. As the months go by between scenes and the characters deal with big life changes – career, marriage, pregnancy – it’s fascinating to witness the ways their perceptions of themselves, and what they want and need, begin to alter.

There’s also a stirring debate about the ethics of journalism in war-torn areas, not to mention a fascinating look at the sometimes callous ways journalism is served up for popular consumption.

As in the Fringe, the acting gets a bit shouty in parts, and Hinton can be monotonously harsh, but at least the latter’s in keeping with her determined character. Beverly, in what at first seems a thankless role, lends warmth and compassion to the show. And the final scene between Sarah and James is moving because so much is left unsaid.

Be sure to leave time to talk about this play afterwards.