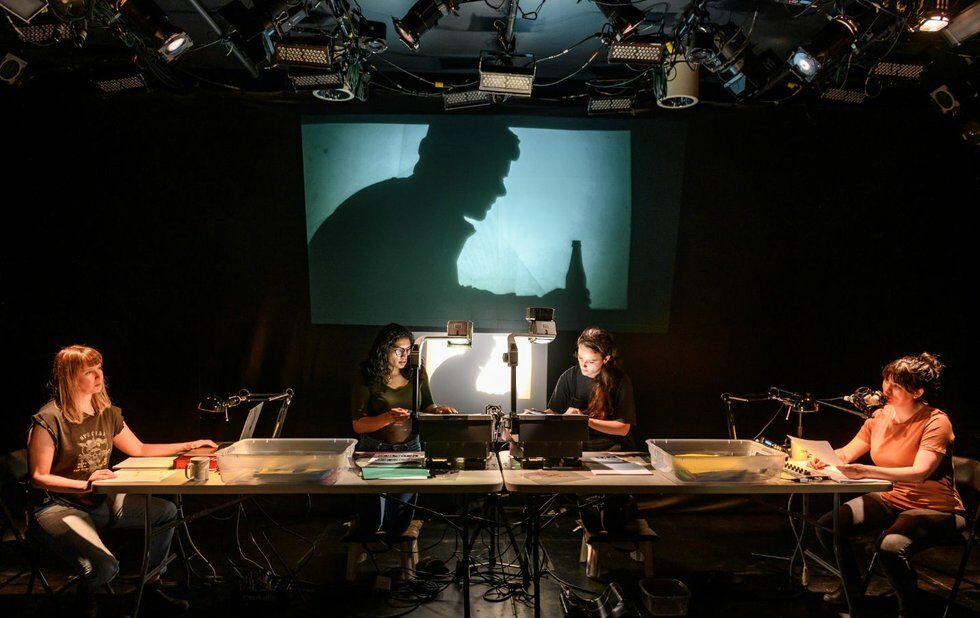 1991 is one of the more powerful, original shows to have come out of Why Not Theatre’s RISER project.

Set in the titular year, writer/director Lewis’s autobiographical coming of age story follows 12-year-old Nicole as she leaves her overworked, divorced mom in Southwestern Ontario to live with her dad in small-town Delaware for a while. A serial killer/rapist has been in the news in Ontario (likely the Paul Bernardo case), which is difficult enough to process as a young, curious girl on the edge of puberty. But that’s nothing compared to what Nicole encounters with her dad and his barroom buddies.

To reveal any more would be a spoiler. The most remarkable thing about the show is its presentation. Intentionally naive-looking cutouts are projected onto a screen and quickly moved around by Mina James and Montserrat Videla to create the look and feel of a movie. What’s astonishing is how much variety there is in this format (projection designs are by Patrick Blenkarn and Lewis) perspectives shift, there’s lots of motion and the audience reads a lot into the blank-seeming characters.

Lewis voices Nicole (I’m assuming Cole is a shortened version of her name) while Jessica Carmichael, her voice often distorted by a microphone, speaks all the other characters in Nicole’s life. Carmichael’s rapid-fire character changes are stunning, and the mood of each scene is enhanced by Sam Ferguson’s sensitive sound design.

Best of all, the artists are open to exploring the full potential of their project. After a key scene, Lewis approaches the overhead projector and does something that is shocking… then builds on that action to evoke something even more shocking. (Warning: the play could be triggering for abuse survivors.)

The ending feels abrupt, but I hope this work has an extended life. Especially in light of the #MeToo movement and the discussion around consent, it’s essential, powerful viewing.