The jukebox musical cranks out its 80s rock classics just fine, but it's killed by clichés and smugness 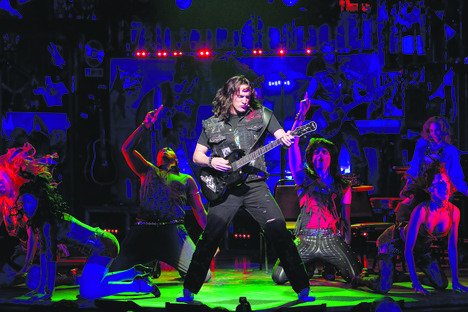 Love em or hate em, jukebox musicals are here to stay. On-the-fence ticket buyers needn’t worry about liking a show’s music because they already know the songs. Entire generations can get nostalgic for their youth, and they’re presumably in a higher income bracket now so they can afford the premium tickets for that glitzy trip down memory lane.

The only losers are aspiring composers of musicals – oh, and theatre critics who believe the genre can do more than evoke a Pavlovian response to certain electric guitar riffs.

Like We Will Rock You, Rock Of Ages – mashed together from the glam rock catalogue of the 80s – is virtually critic-proof. If you build it (and pay off those pricey licensing fees), they will come. In droves. And they’ll be wearing mullets and eyeliner.

Too bad the book connecting the songs is so often neglected. Rock Of Ages’ script feels penned by a group of people holed up for one drug-addled, furniture-trashing weekend at the Chateau Marmont. It makes the books for Mamma Mia! and WWRY feel like Bernard Shaw.

In 1987, aspiring actor Sherrie (Elicia MacKenzie) gets off the bus in L.A.’s Sunset Strip and meets Drew (Yvan Pedneault), an aspiring rocker who’s waiting for that big break. Soon the club where they both work, run by former hippie Dennis (David W. Keeley), is threatened with demolition by evil German business tycoon Hertz (Victor A. Young) and his flamey son Franz (Cody Scott Lancaster), who want to put up a Foot Locker.

Also along for the ride are a tie-dyed Berkeley activist named Regina (Josephine Rose Roberts), Stacee Jaxx (Peter Deiwick), the self-destructive lead singer of a group called Arsenal, and Lonny (Aaron Walpole), the club’s sound guy who, also acts as the show’s narrator.

Later on a character named Justice (Angela Teek) appears as the owner of a strip club. Can you guess who comes looking for a job there after getting fired?

All of this would be almost bearable were it not delivered with a we’ve-seen-it-all-before smugness. Walpole, a former Canadian Idol Top 3 contestant, has a gritty voice and genial presence. But as narrator, he’s forced to keep popping in to remind us that we’re watching a cheesy musical. Those other jukebox musicals at least have an affection for the genre Rock Of Ages has contempt for it.

The most frustrating thing about the show – which features big hair and even bigger stereotypes about gays, rocker chicks and activists – is that its supporters can just say, “Well, it was the 80s.” But whose 80s, exactly? Where’s AIDS? Junk bond traders? Second-wave feminism?

Let’s be clear: Rock Of Ages is all about the music. The songs, cranked out by a great band, come fast and are often strung together like mini medleys. The lyrics are generic enough to be shoehorned into any scenario: love (I’ve Been Waiting For A Girl Like You I Want To Know What Love Is) rejection (Harden My Heart) defiance (Hit Me With Your Best Shot).

The show works best in its more surreal moments, such as when Sherrie busts out of her nervous good girl persona to belt out When You Love Someone, or when Drew expresses his feelings by delivering a few full-throttle bars of I Wanna Rock.

And although you could easily drop one or two characters in the silly storyline, the thing is superbly sung. Pedneault (love the addition of a few lines about his French-Canadian accent) and MacKenzie have the power and steel in their voices to cut through the thrashing guitars and Deiwick has great fun as the snaky, ab-revealing Stacee.

It’s really just a multi-million-dollar version of rock week at Canadian Idol. And despite any criticism, it’ll likely rock on for a while.