Powerful, politically relevant works like this don’t come along often 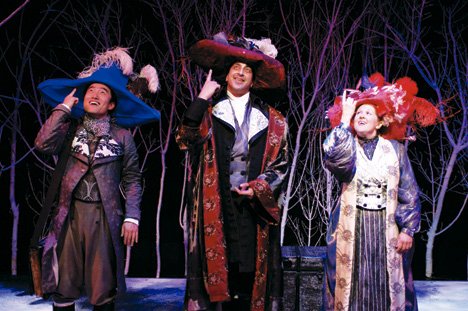 If you missed scorched during its sold-out run last season at the Tarragon, go. Even if you didn’t, see it again. Great theatre like this – epic, politically relevant, rich with emotion – doesn’t come along too often.

After the death of their mother, Nawal, Montreal twins Janine (Sophie Goulet) and Simon (Sergio Di Zio) dig into Nawal’s past, travelling to the unnamed Middle Eastern country where she grew up. Here, they encounter stories of war, courage and abuse that might fill in the pieces of their own fractured identities and the mother they hardly knew.

Wajdi Mouawad sets up the play like a mystery. Who is Nawal? Do the twins really have a living sibling and a father? The various stages of Nawal’s life – she’s played by three different actors to represent three periods – take on the weight and resonance of myth.

Director Richard Rose handles the script’s challenges with ease. In several instances past and present collide, and the results are always haunting – and theatrical. Movies can’t achieve effects like these.

The design elements enhance the script, too. Sound designer Todd Charlton uses loud rock music or the noise of a jackhammer to unhinge us. One of the more disturbing scenes – about a burning bus – is made more powerful by the smell of smoke lingering in the air from a previous scene.

Most of the strong cast return from the original production. Nicola Lipman, as the oldest Nawal, delivers a series of monologues that are shot through with pain and quiet dignity. Alon Nashman’s gentle notary, Alphonse, mouths malapropisms that successfully break up the show’s tension.

My only quibble with the new cast is Sarah Orenstein, a normally fine actor who’s out of her depth as the politically engaged middle Nawal. She lacks the grit and determination of the original production’s Kelli Fox.

That’s a tiny point to make in such a strong, and proudly literary, work. Mouawad was right not to be too specific about the play’s setting. Its theme of the endless cycle of violence and retribution feels achingly relevant today, but its power is universal.