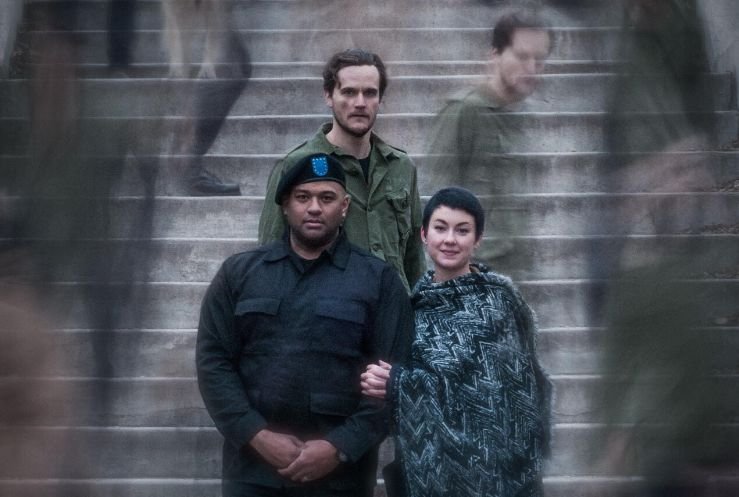 With its pomp and politics, Othello isn’t exactly the most intimate play in the Shakespeare canon. But Shakespeare BASH’d brings audiences so close to the action that you can practically reach out and touch the play’s fateful handkerchief.

In director James Wallis‘s fly-on-the-wall production at the Monarch, we’re right there as Iago (James Graham) hatches a scheme involving rival Cassio (Dylan Evans) and lustful Roderigo (Jeff Dingle) to get back at the eponymous Moor (E.B. Smith), who’s overlooked him for a promotion.

Scenes segue into each other quickly because of Wallis’s clever use of the space: the narrow playing area, with audience members on either side, goes from the bar’s main entrance to a more formal area on the opposite side of the room, making exits and entrances seem natural.

The plot also moves swiftly because the performers are so excellent. Graham has so completely internalized Iago’s twisted logic that his pronouncements elicit some nervous giggles because they’re so convincing. (Don’t be surprised if you start thinking about serial killer Ted Bundy when watching the clean-cut actor’s chilly turn.)

Julia Nish-Lapidus provides some helpful comic relief as the clown, whose appearance in the second half is preceded by a clever bit of stage business involving a prop. And Dingle brings a physically nimble and high-energy take on Roderigo.

Evans makes a noble, earnest Cassio. And the fight scenes (Nate Bitton is fight director) are among the most convincing I’ve ever seen on a local stage.

The biggest revelation, however, is Catherine Rainville‘s Desdemona, whose early strength, grounded delivery and confidence contrast pitifully with her later confusion as she’s caught in Iago’s trap to make husband Othello jealous.

As for Smith, he’s got an imposing physical presence, a rich, booming voice and convincing flashes of anger. But there’s little dignity or poetry in his performance, which upsets the balance of this otherwise fine production.