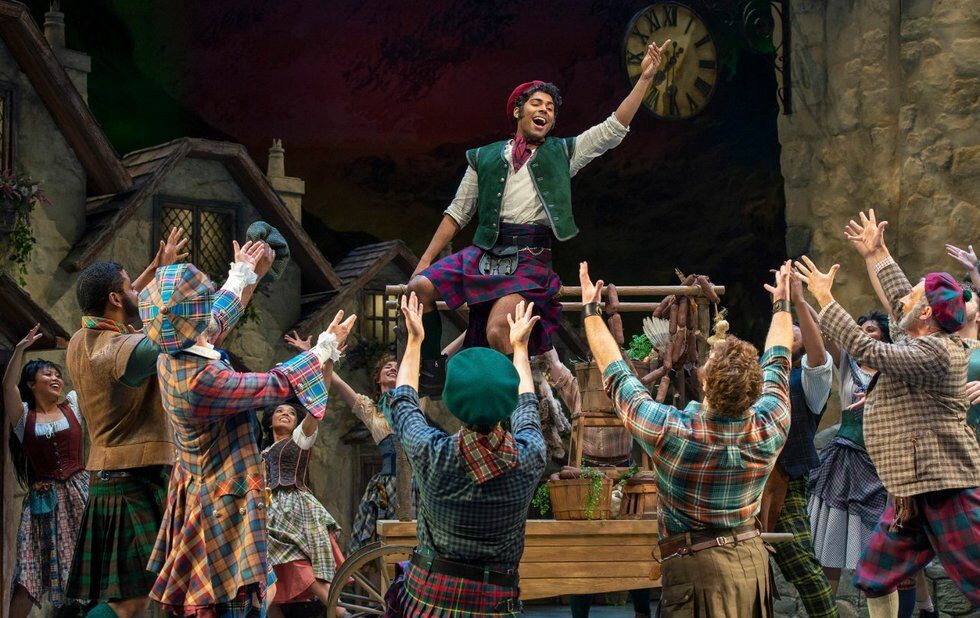 Many Golden Age musicals have received revised productions lately to challenge or appeal to contemporary audiences. Recent Broadway versions of My Fair Lady and Oklahoma! were definitely not what the original audiences saw back in the 40s and 50s.

Brigadoon, which doesnt belong in the same illustrious company as those shows although it was written by MFLs Alan Jay Lerner and Frederick Loewe is a tougher sell. And though writer Brian Hill has revised Lerners book for this Shaw Festival production, it still feels slight, dated and inconsequential.

Hill has set the show after the Second World War, when disillusioned, traumatized American war veterans Tommy (George Krissa) and Jeff (Mike Nadajewski) are on a hunting trip in the Scottish highlands before Tommy reluctantly gets married back in Manhattan. By chance they stumble upon the eponymous Brigadoon, a rustic, quaint village populated by people in tartan kilts and corseted dresses. Is this some cultural festival? Nope. It turns out this utopian town comes to life for one day every 100 years. And that happens to be today.

Of course, Tommy quickly falls in love with Fiona (Alexis Gordon), whose sister Jean (Madelyn Kriese) is getting married to Charlie (Matt Nethersole), much to the chagrin of her jealous ex Harry (Travis Seetoo). Theres an eye-roll-worthy subplot about Jeff finding, if not love, then at least lust, with Meg (Kristi Frank), who’s just a girl who to borrow from Oklahoma! canna say no.

Perhaps director Glynis Leyshon and musical director Paul Sportelli felt the theme of people escaping societal horrors for some fantasy world would resonate in the Trump and Ford era.

But the Brigadoonians world creates more head-scratching than envy. Why did Jean turn down Harry? What attracts Tommy to Fiona, and vice versa? And oh yeah, why are all the townspeoples accents so wavering?

We dont look to musicals for realism. But Hill hasnt solved some easily fixable questions. Wouldnt the Brigadoonians be curious about what these people-from-the-future are wearing and saying? And after a dramatic plot turn in the second act, Tommy guiltily believes his presence has adversely affected the town. Why?

All of this would be forgivable if the musical were filled with memorable songs. But Loewes quaint score verges on kitsch, with the shows big number the standard Almost Like Being In Love feeling out of place for this centuries-old setting. Agnes DeMilles choreography, including a mournful solo by a character we barely know, feels antiquated.

Without knowing why Tommy and Fiona are in love, its hard to care for their characters. Krissa has a pure, sweet voice that makes his 11 oclock number There But For You Go I a highlight. Gordon is her usual spirited self, but her top notes are often shrill and incomprehensible.

The most grounded performance comes from Nadajewski, whose wisecracking skeptic often says what were all thinking.

Its telling that the most spontaneous applause comes when vivid, lifelike images of a deer in a forest are projected onto Pam Johnsons set. (Projections are designed by Corwin Ferguson.)

Its too bad the rest of the nostalgia-drenched show doesnt evoke the same sort of magic.