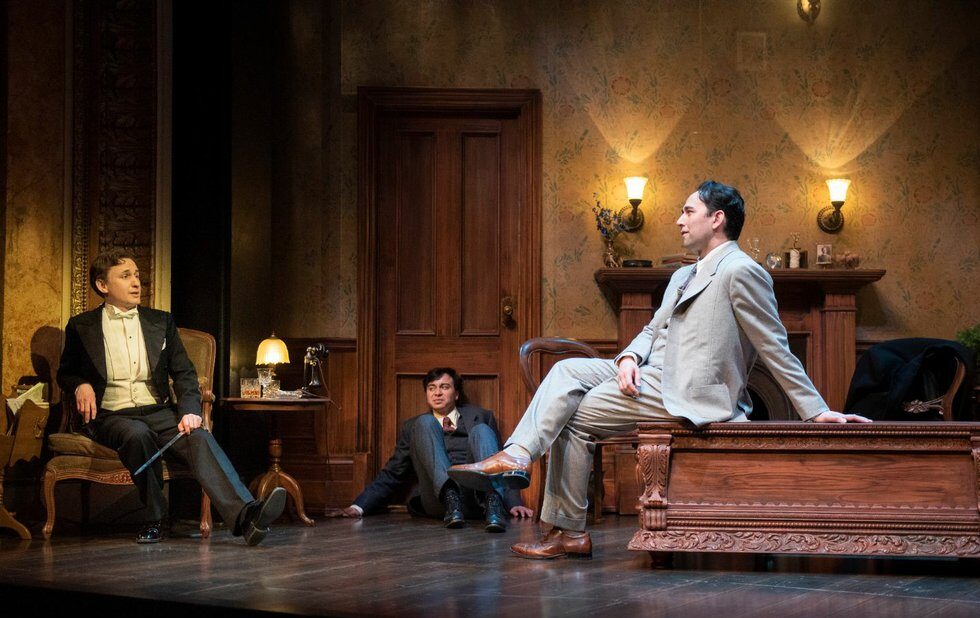 Patrick Hamilton’s Rope marks the return of murder mysteries to the Shaw Festival’s stages. Not that there’s any mystery about whodunnit in this case. Best known from Alfred Hitchcock’s film version, the play tells us quickly who the murderers are its suspense and psychological complexity come from why they’ve killed and whether they will be caught.

It’s 1929 and we’re in the Mayfair parlour of students Wyndham Brandon (Kelly Wong) and Charles Granillo (Travis Seetoo). After killing a fellow undergrad and storing his body in a chest, the two – who are obviously a couple – are about to have a casual little dinner party before driving back to Oxford that night.

Wyndham has nominally invited the older couple to look at some books, but what he really wants is to savour the sight of them unknowingly dining a metre or two from their son’s corpse. In a gruesome touch, he’s instructed the maid (Élodie Gillett) to leave food, buffet style, on top of the chest in which the body has been stuffed.

Although the opening moments are disorienting, director Jani Lauzon has lots of fun both with the genre and with Hamilton’s nasty little script.

A fine actor herself, she gets terrific performances from her cast. Golemba and Gordon’s frivolous flirting provides an amusing counterpoint to the tense murder plot. And Seetoo elicits pity as his weak Charles gets drunker and therefore less careful.

Wong creates a chillingly amoral Wyndham, cracks eventually appearing on his smug surface as the night goes on.

But it’s Therriault who delivers the show’s most memorable performance. Full of Wildean wit and seen-it-all ennui, he speaks his bons mots with icy loathing for everyone around him, even himself. Watching him gradually realize the implications of his philosophy is as intriguing as the murder plot itself.

Joanna Yu’s realistic set includes a door to a hallway where we can sort of glimpse things (or through which characters can eavesdrop), and Louise Guinand’s lighting design and John Gzowski’s soundscape, complete with lightning and thunder, help ratchet up the tension.

When it was revived a decade ago at London’s Almeida Theatre, the show ran without an intermission. I wish this production had gone straight through as well, so as not to interrupt the carefully crafted suspense.