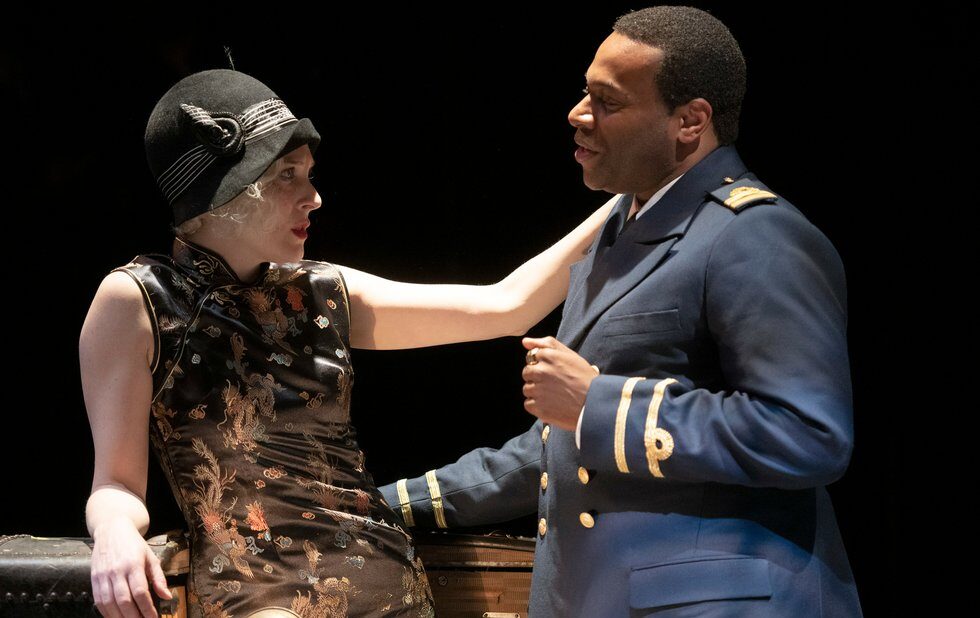 Sex sells. Buxom burlesque performer Mae West understood that throughout her long career, so it’s no surprise she gave the title to her 1926 play, which, despite scathing reviews, ran for a year and a half on Broadway to packed houses.

Margy LaMont (Diana Donnelly) is an in-demand prostitute in Montreal’s red light district, a popular destination during the Prohibition era. After cleaning up a mess involving her brutal pimp, Rocky (Kristopher Bowman), she travels the world, meeting Jimmy (Julia Course), a young American millionaire, who doesn’t know of her past and wants to marry her. Also in her orbit are her friend Agnes (Jonathan Tan), a down-trodden prostitute, and Gregg (André Sills), a naval officer who’s one of Margy’s clients and has always carried a torch for her.

The script is messy and melodramatic, with some developments in the final third that elicit nervous giggles because they’re so unlikely. But Margy is an engaging, admirable character: tough, honest and totally unsentimental about her situation. Donnelly has a monologue about being used by men that’s so sharp and observant, it almost plays like a hot take on Reddit.

The use of dozens of suitcases as the play’s primary props brings to mind the transitory nature of these people’s lives. And by having four poles with height charts on them – as well as the repeated sound of an old-fashioned camera taking a mug shot – it reminds us of the fate that befell West and the play when she was convicted of “corrupting the morals of youth” and sentenced to 10 days in jail.

Watching Sex, you might be reminded of any number of Hollywood films, past and present – from Preston Sturges’s The Palm Beach Story to Pretty Woman. Ryan deSouza’s musical direction includes novelty numbers (Allegra Fulton is involved in one whopper) and torchy ballads that feel dated yet universal.

And the actors handle the dialogue with respect and dignity. Donnelly delivers her one-liners with wit, but she doesn’t rely on the innuendo that was a West trademark. And Fiona Byrne invests her society matron with a complexity that suggests layers of compromise and repression.

West’s star might be dimmed today – have millennials even heard of her? – but her legend lives on in some circles. Several years ago, she was impersonated by a contestant on an episode of RuPaul’s Drag Race All Stars. Let’s hope this production encourages more people to discover her – and enjoy some good Sex while they’re at it.