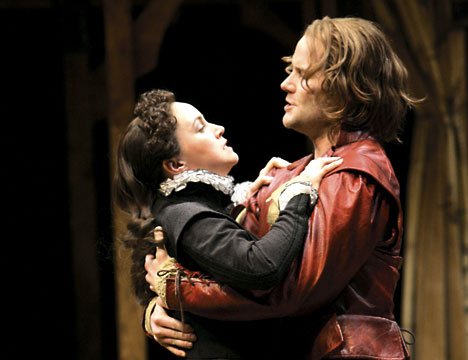 Irene Poole and Evan Buliung are a Kate and Petruchio for the ages.

Trust director Peter Hinton to treat audiences to an unusual take on a play they think they know, and to reveal its unsuspected richness.

It’s hard to sit through most productions of The Taming Of The Shrew, especially its final scene where the now-tamed (or rather beaten-down) Kate makes obeisance to her lord and husband Petruchio, a difficult and sometimes dislikable character.

In Hinton’s hands – and those of his leads, Irene Poole and Evan Buliung – the scene is the rightful climax of the play, a distillation of the strong chemistry, respect and sensuality conjured by the two actors. Poole makes her final speech such a passionate one, so rich in meaning, that even her Petruchio is touched.

There’s vibrancy in the work of other actors, too, beginning with Stephen Ouimette’s Puritan-like Baptista, Kate’s father, who clearly has no use for his elder daughter that rejection has soured her relationship with the world.

Adrienne Gould plays his younger daughter, Bianca, with brainy feistiness, and her commedia-style suitors – Juan Chioran as the plotting old Gremio, Randy Hughson as an often sympathetic Hortensio and Jeff Lillico as the boyish Lucentio – are carefully drawn, as are the servants performed by Ben Carlson, Patrick McManus and Lucy Peacock. The latter plays Petruchio’s man Grumio as a woman, thus suggesting parallels between Petruchio’s handling of both Grumio and Kate.

This is a vibrant, robust production where strong women’s voices echo from the opening tavern scene. Still, it’s surprising to see Hinton turn the prologue’s Lord, who sets the frame for the story proper, into Queen Elizabeth herself, who’s dropped into her local pub with some courtiers for a flagon of ale. Barbara Fulton brings fire to the role, even taking part in the final few scenes as the widow who weds Hortensio the Queen understands that some of Kate’s last speech is directed specifically to her.

Oh, and in case I wasn’t clear – I’ve never seen a better and more complex Kate and Petruchio than Poole and Buliung, a witty couple who are smitten with each other from their first meeting.