NOW MagazineCultureTheatreSoulpeppers Vimy is rich in historical detail and emotion

Soulpeppers Vimy is rich in historical detail and emotion

VIMY by Vern Thiessen (Soulpepper) At the Young Centre for the Performing Arts (50 Tank House). Runs to Aug 5.. 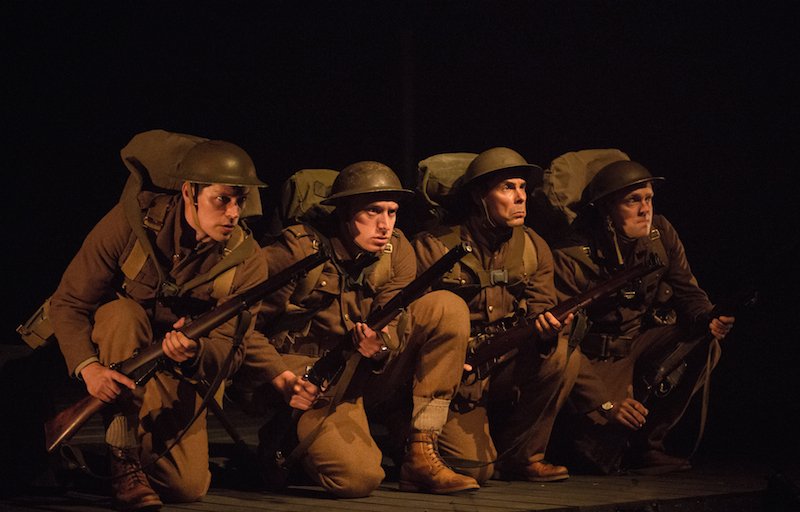 Soulpeppers intense and action-packed remount of Vern Thiessens World War One drama offers a realistic (and terrifying) glimpse of this important battle and its aftermath, which occurred one hundred years ago this year. With soldiers from across the country united on the battlefield for the first time, Canadas successful attack on the German-held escarpment in Northern France has entered the Canadian imagination as a key nation-building moment.

The story weaves together the experiences of four Canadian soldiers (Sebastien Bertrand, Tim Dowler-Coltman, Wesley French, TJ Riley) wounded in the assault, and the nurse (Christine Horne) caring for them in a field hospital. Well-crafted scenes reveal their physical and mental scars from bullets, shrapnel, bayonets and gas, but also transport us back to simpler times before the war, and right into the midst of the harrowing and bloody battle itself.

With the four soldiers representing different provinces, as well as French, First Nations and English backgrounds, the battlefield and hospital also become a microcosm of Canadas uncomfortable historical divisions, which at times erupts into convincing fisticuffs choreographed by fight director Simon Fon.

Thiessens script is moving, but also rich in historical detail (youll learn about military tactics like the creeping barrage, and disturbing practices like shot-at-dawn) and director Diana Leblanc reinforces this commitment to accuracy with keen attention to detail and realism in the military uniforms and gear, making the tense and explosive battle scenes that comprise a good chunk of the action especially captivating (and potentially too disturbing for some).

Leblanc nicely employs quick, creative and fluid transitions between past and present that instantly recast the convalescing soldiers as different characters in each others nuanced and emotional backstories, which keeps the stories moving at a good clip.

Whether or not the Battle of Vimy Ridge was as crucial in forging Canadas national identity back then as it seems to have become today (historians have recently challenged its importance in the matter), its an important event to remember and understand.

This play cuts through the accrued nationalist mythos, offering a gritty, personal and complex look at the soldiers and nurses who were forever changed by this event.