NOW MagazineCultureTheatreSoulpepper’s The Royale pulls some of its dramatic punches

Soulpepper’s The Royale pulls some of its dramatic punches

Play based on the life of world heavyweight champion Jack Johnson should prove a contender come awards time, especially for its actors 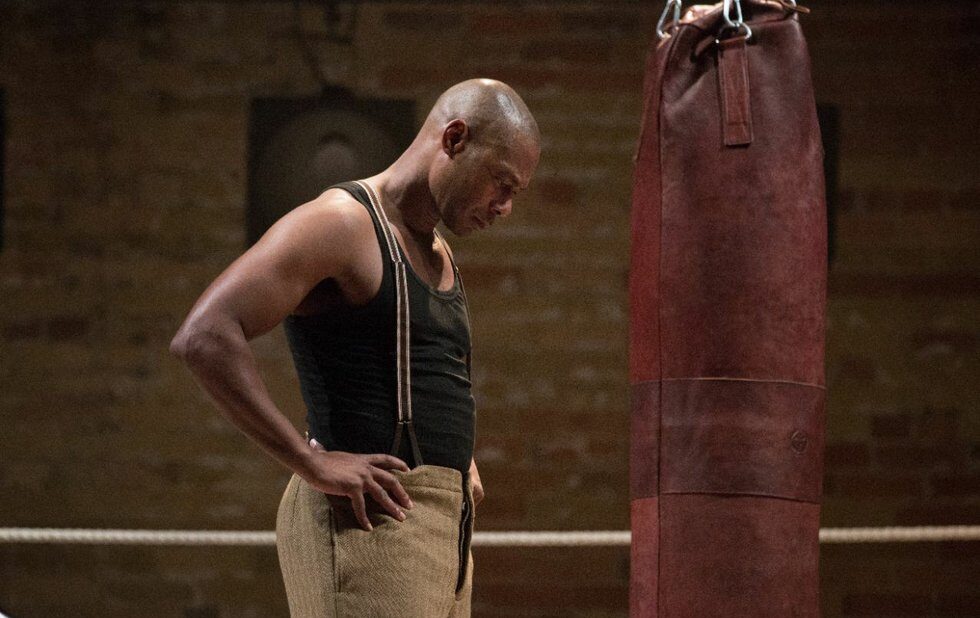 While Marco Ramirez’s debut play, The Royale, tells a fascinating chapter in American sports and culture, it pulls some punches in the drama department.

It’s loosely based on the life of boxer Jack Johnson, who – not exactly a spoiler because it’s in the program – became the first African-American world heavyweight champion in 1908.

Called Jay in the play, and performed with gusto and sweaty physicality by Dion Johnstone, he’s a cocky, strutting peacock fed up with battling unworthy competitors like Fish (Christef Desir), whom he defeats in the first scene and eventually hires as a sparring partner.

What Jay really wants is to take on the current white heavyweight champ, now retired but willing to enter the ring for a 90 per cent take of the gate, win or lose. Maybe then, Jay believes, his photo (Johnson was notoriously vain) would make the front page of newspapers, not be buried on page five.

But, as Jay’s white promoter (Diego Matamoros) and his Black trainer (Alexander Thomas) know, there’s a lot more at stake in this match than two men fighting. This becomes clear after a woman (Sabryn Rock) appears from Jay’s mysterious past.

Rock’s magnificent, focused mid-show appearance (she’s the only woman) adds texture and a necessary personal dimension to the story, which has hitherto been concerned with testosterone-charged showboating. Even the normally subtle Matamoros is given to shouting hysterically, as if this were some generic Rocky sequel.

Director Guillermo Verdecchia and his design team try to pump up the underwritten script with little details. I particularly like Thomas Ryder Payne’s enhanced sound design when Jay, at a low point, takes out his aggression on a punching bag and the blows reverberate.

The way Verdecchia stages the boxing matches is interesting to look at – the fighters face the audience, punching the air and reacting to invisible jabs – but often difficult to process. And the wide-open playing area – the theatre’s brick walls are exposed on three sides – mean some lines get lost. (The production is selling some onstage seats, which might make the experience more immediate.)

But the story behind the central image in the title is a knockout, and the play’s final line is brilliant in its ambiguity.

And Johnstone and Rock could very well be contenders come awards time.