NOW MagazineCultureTheatreSpoiler alert: some theatre critics really know how to ruin a show

Spoiler alert: some theatre critics really know how to ruin a show

When people talk about spoilers, its usually to do with big plot points in film and TV shows who. 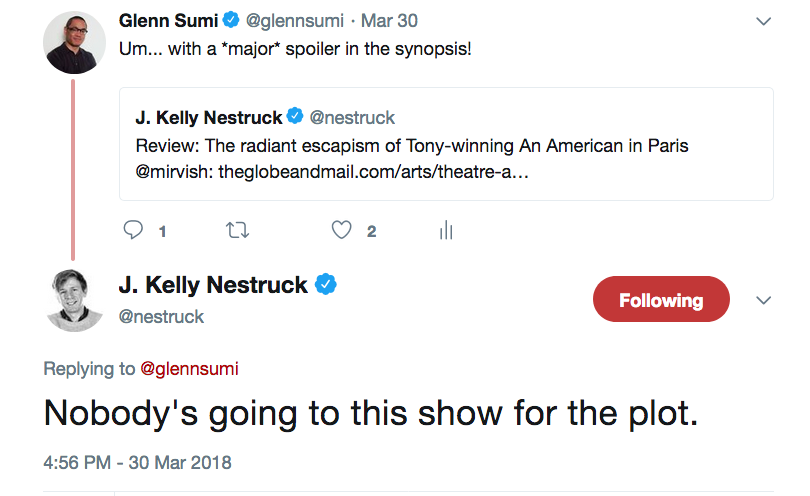 Warning: reading reviews before seeing a show can be hazardous to your enjoyment.

But you can have spoilers at the theatre, too. And no, Im not talking about a Shakespeare tragedy ending with a corpse-strewn stage. Thats a no-brainer.

In three recent shows, my theatre critic colleagues have given away important plot points that the creators have carefully set up as mysteries.

As of this writing, one of the shows (Punk Rock) has closed, and one (An American In Paris) closes this weekend, but the other (Come From Away) is long-running. So youve been warned. Dont read on if you intend to see one of them.

My Globe And Mail counterpart, J. Kelly Nestruck, is the king of spoilers. In his review of Punk Rock, he begins with, Spoiler alert: Its impossible to seriously discuss the success or failure of Punk Rock without noting that it climaxes in a school shooting.

I disagree. I think it was and is possible to discuss the play without mentioning the shooting, and our reviewer, Jordan Bimm, did just that.

But Globe readers didnt get a choice. The headline likely written by an editor contained no such alert: In the wake of Parkland, Punk Rock feels off rhythm in its dramatization of a school shooting.

Karen Fricker offered a similar spoiler alert in the Toronto Star, and again, an editor, no doubt looking to make theatre relevant and timely click-bait, wrote this headline: In a 2018 beset by school shootings, the ambiguity of Simon Stephens Punk Rock jars.

If Im thinking about seeing the show, now Ill know what to look forward to. From the very first line of dialogue Ill be thinking, Whos going to be the shooter? Whos going to be shot? Instead of watching a play about bullying, cliques and mental health evolve organically, Ill be focused on one thing. (True, the plays program advisory mentioned shots, but thats not the same thing as a mass school shooting.)

Martha Schabass Globe review of An American In Paris, while rich in details about dance, also contains this spoilery line: [Book writer Craig] Lucas has given the character [of Lise] more agency and backstory. Shes Jewish and longs to honour the memory of her parents love (who may or may not have been killed in the camps)… she grapples with her duty to the family who hid her throughout the war, and the consequent obligation to marry their son.

Lets forget for a moment the awkward construction of that parenthetical statement. Lises Jewishness, and the reason why she feels obligated to marry the son, are a huge part of her characters secret. This information is revealed, in a scene meant to be poignant, in the shows final 10 or 15 minutes.

When I retweeted the review saying it contained a major spoiler, Nestruck glibly countered, Nobodys going to this show for the plot.

Theres some truth in that. We go to theatre and the movies for many reasons: spectacle, escapism, a night out. An American In Paris is being marketed as a Gershwin musical with lots of dancing. But why even hire a dramatist a Tony and Pulitzer Prize nominee, at that if you dont care about the plot? Lucass book isnt a masterpiece, but hes taken care to construct a mystery. And there, in two sentences, its been solved without anyone asking for it.

Nestrucks other recent spoiler might seem small, but again it gives away a plot point thats been carefully developed.

Come From Away juggles dozens of storylines. But one of the most sensitive concerns Ali, an Egyptian passenger who experiences prejudice and fear while stranded in Gander, Newfoundland. He keeps asking schoolteacher Beulah, whos overseeing the cooking, if he can help out in the kitchen, but Beulah repeatedly tells him no. Is she suspicious of his motives? Perhaps. The audience wonders why he wants to help, too.

Turns out, in a line that always gets a laugh (and is, significantly, revealed late in the show), that hes a world-class chef and could use his expertise to feed everyone. In his review, Nestruck blithely reveals that Ali is an Egyptian chef who encounters the outer limits of others openness.

All that building up of dramatic tension… to be deflated with half a sentence in a review.

As an editor myself, Ill often ask a reviewer when a bit of information comes in a play or movie. Is it part of the set-up, or does it arrive late?

I generally dont have to ask this of NOWs senior film writer, Norman Wilner, whose reviews are so spoiler-free hell sometimes avoid mentioning the plot altogether, especially for a big film like one of the Star Wars sequels.

I remember when he filed his review of Darren Aronofskys Mother!, he suggested readers not even look at the cast list on imdb. I didnt, and so when I eventually saw the film and a few familiar actors began popping up in Aronofskys surreal universe, I was genuinely delighted. I wasnt thinking: Gee, when will Michelle Pfeiffer show up?

Part of the joy of being in the audience and all critics are, ultimately, audience members is witnessing a story unfold. Good writers, directors and actors know that every moment matters: a look, the timbre of voice, a musical cue. And the order in which we learn things.

The sensitive reviewer (and headline writer) will know how to suggest the information to come and not blurt it out like some annoying town crier.