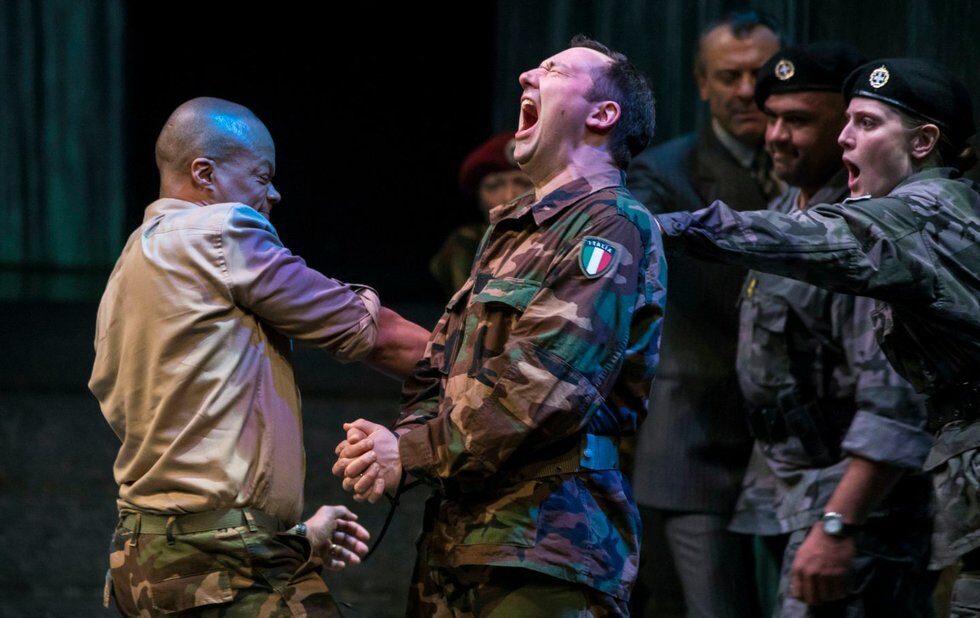 Othello is a problematic play. The Black general Othello (Michael Blake) is driven by his envious underling Iago (Gordon S. Miller) to a rage of jealousy against his wife, Desdemona (Amelia Sargisson).

Its simple possibly too simple. The narrative feels forced, hurtling along at a precipitous pace. Theres no subplot to give the work some supplementary themes and no friendly fool or anything else to give the piece just a whiff of comic relief. Youre just watching a mans inexorable downfall while wishing he would talk to his wife for just one minute.

Director Nigel Shawn Williams gives the play some much-needed texture by giving it a contemporary setting and emphasizing the racism that fuels Iagos resentment and the misogyny that helps bring Othello down.

These themes are there dimly in the text, but Williams makes them vivid via some smart strategies. He creates a wordless scene to begin the play in which Othello is getting married to the fair Desdemona while, accompanied by an edgy electronic soundtrack, soldiers express their displeasure in threatening movement. Its clear from the start that Othello has crossed a line.

The scene works to make you more aware of the raging racism expressed in the play, not only by Desdemonas father, who was fine with Othello as long as he was a charming dinner guest and not his son-in-law. Others also betray their casual racism, including even an admirer of Othello, who refers to him as more fair than Black. After that first scene, a line like that has an added impact.

In Williamss conception, Emilia (Laura Condlin), Iagos wife, is not Desdemonas handmaiden but rather a soldier assigned to protect her. Emilia is joined in the armed forces by other women who stand stalwart while the male characters make infuriating sexist remarks. Williams definitely has sexual harassment in the military on his mind. And in this age of #MeToo, Emilia even though she carries her own weapon exhibits the signs of an abused wife as she acquiesces to Iagos dictates.

As Iago keeps chipping away at Othellos self-esteem and plotting ways to implicate Othello-favoured officer Cassio (Johnathan Sousa) in an affair with Desdemona, its clear that its Othellos own misogyny that leads him to believe Iago without bothering to check in with his wife. A final sequence featuring the women soldiers acts as a frame with the first to reflect the productions anti-sexist bent.

Denyse Karns set adds to the tumultuous atmosphere, especially via her video projections. Usually I think of these as a bit of a cheat. Shakespeares text and a chair okay, with a few props, too should usually do the trick. But here, Karns black-and-white images sometimes they look like smoke, sometimes water, sometimes dripping blood reflect the roiling emotions that are getting out of control.

Blake has the charisma the title role requires, ably demonstrating how hes risen through the army ranks, though the performance could use some more variation, especially as Othello begins to lose his grip sometimes rage can have its silent moments. Sargisson gives Desdemona dignity and, more important, unusual heft. After seeing her, you will never be tempted to think of Desdemona as a passive victim.

But its Miller who anchors the production. His Iago is not the wiry, scary, silent type, but a flip and glib menace, who appears to be ragging Othello for pure sport. On opening night, he flew through the lengthy exposition in the opening act a bit too quickly, but soon settled into a great performance as a happy-go-lucky shit disturber, more sly than vicious, who should by no means be underestimated. Hes almost likeable and thats a real feat.