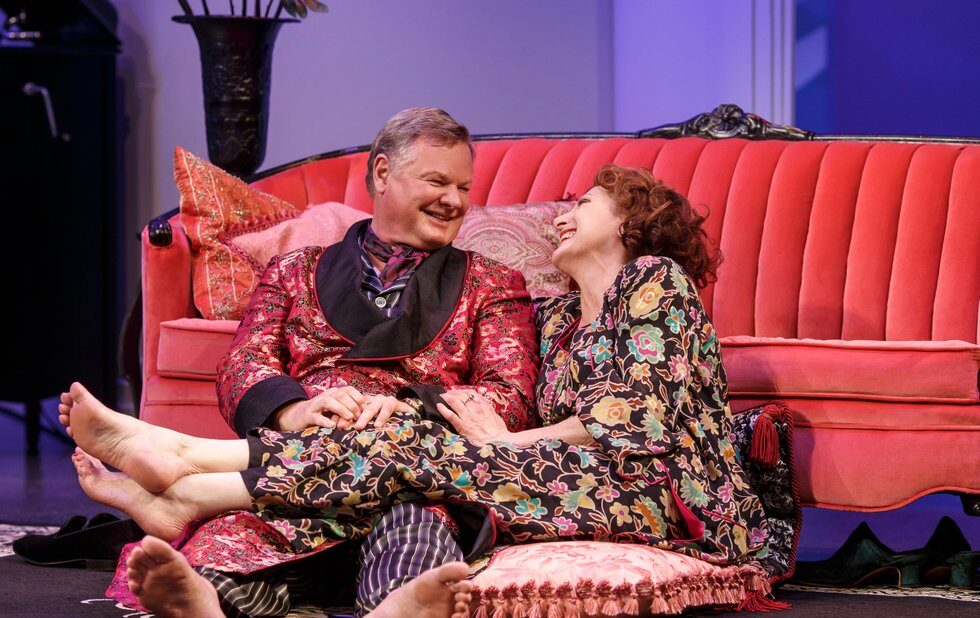 Any study of the history of romantic comedies would be incomplete without Private Lives, Noël Coward’s amusing and charming 1930 play.

The work is still frequently performed – most recently in a revival starring Kim Cattrall and Paul Gross – but it’s usually done with brittle drawing room elegance.

Director Carey Perloff’s Stratford Festival production is the first that has made me believe in the fiery passion and warmth shared by its two main characters, Elyot (Geraint Wyn Davies) and Amanda (Lucy Peacock).

Divorced now for five years but still hurting, they’ve recently become married to others: Elyot to the whiny Sybil (Sophia Walker), Amanda to the uptight, stuffy Victor (Mike Shara). By coincidence, they’ve both decided to honeymoon in the south of France in – wouldn’t you know it? – adjoining hotel rooms.

It’s a classic farcical set-up, and Perloff makes sure the scene in which the two recognize each other is played for maximum visual humour.

But what’s revelatory about this production is how complex the characters are. The personas that Amanda and Elyot have created for their new spouses in the first scene crumble when they see their exes.

And over the next hour and a half, Davies and Peacock are so believably enmeshed as a couple – they know, love and hate each other’s idiosyncrasies – that it’s a delight to simply watch them together.

Walker and Shara have less to do, but they’re excellent. Walker makes her voice shrill and her manner coyly manipulative – you can understand why Elyot’s eyes are wandering while he talks to her at the beginning. And the way Shara enunciates his words tells you a lot about him. Perloff also gives him a bit of stage business at the end of one scene, in which he adjusts a vase of flowers in a way that tells you how wrong he is for Amanda.

Ken MacDonald’s art deco set features a wave motif in its design that suggests light and airiness. And Christina Poddubiuk’s costumes evoke between-the-wars fashion with a sumptuousness you can feel.

Some of the lines haven’t aged well – a reference to Elyot hitting Amanda elicits groans and gasps rather than laughs. And the second half (which comprises the second and third acts of the play) suffers from a dip in energy.

But whenever Davies and Peacock are onstage, arguing, playfully throwing cushions at each other or embracing each other in a way that shows you they know and understand every curve of their bodies, this play sparkles.