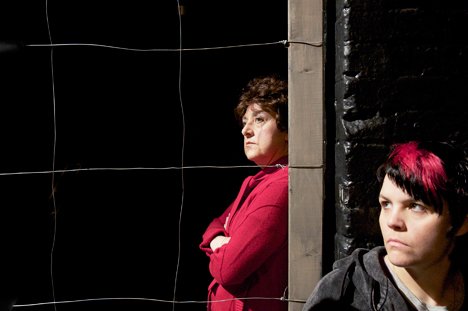 Cast as the title character in a non-traditional version of Hamlet, Blandy finds personal meaning in lines like “the readiness is all” and “I defy augury.” Sorele, who played Miranda in a school production of The Tempest, realizes that her jailers treat the Jews as despicable Calibans she draws a positive, rebellious anger from elsewhere in the play’s text.

Alternating delicacy and vivid language, Thompson reveals the souls of these two characters, their fears and their growing sense of power, as the spotlight moves from one to the other. The scenes become shorter, the parallels between this pair fighting for their lives more startling, until with a touch of stage magic their worlds merge.

Though the two come from such different backgrounds — Blandy has known a lifetime of abuse and violence, Sorele comes from a privileged household — both characters talk about horrors but in distinctive ways. The older Sorele looks back over a 40-year gap to the experiences of the 1940s her anger and energy are colder and more focused as it streams through her memory. Blandy is living with her suffering, and the result is a hotter fury and a jittery tension, an uncertainty of what the future will bring.

The action is played out on a largely bare stage, which production designer Beth Kates has separated in two with a mesh fence the only other set pieces are a pair of ladders, one brightly coloured to suggest a children’s playground, the other a more plain ladder that descends into the hell of the concentration camp.

Director Brian Quirt adds a few staging surprises, but generally he allows his two fine actors simply to feel the intensity of Thompson’s words and share them with the audience. Every moment resonates with feeling, not least because neither playwright nor performers judge the characters for their weaknesses or heroicize them for their strengths.