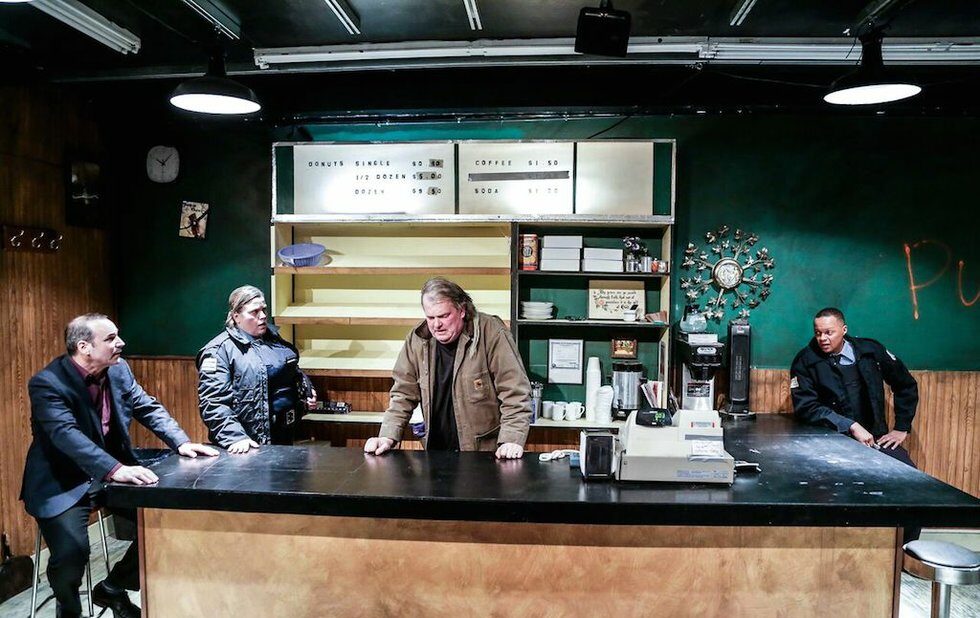 One of the great things about storefront theatres is that theres not much distance between the gritty sidewalk and the make-believe youve walked into. Coal Mine Theatre has successfully exploited that fact with several of their productions, including their most recent, Superior Donuts, which is set in a modest, independent donut shop that could very well exist in the neighbourhood were at: Danforth and Coxwell.

Its owned and operated by the middle-aged Arthur Przybyszewski (Robert Persichini), who inherited it from his Polish immigrant father and has stayed on, even though the signs that he should sell are obvious: hes having a hard time keeping a helper, a Starbucks has opened nearby and the ambitious Russian immigrant (Alex Poch-Goldin) next door wants to buy him out to expand his own business.

Oh, and as the play opens, police are investigating a break-in and vandalism at the shop. Someones written the word pussy in block caps inside.

When a bright young African-American kid named Franco (Nabil Rajo) applies for a job, Arthur grudgingly takes him on, and soon the two are getting along like an odd couple in a sitcom, clashing in a way that you just know will be resolved by the end.

Playwright Tracy Letts (August: Osage County) seems to want to be saying something about race in America. Early on, theres a fine conversation between Franco and Arthur about Black poets, and the play is set several weeks after Obama became president, although theres no mention of that.

But as in a sitcom and yes, the plays been spun off into its own TV show things dont cut very deep.

In interstitial scenes that begin to feel increasingly mannered, underscored by the soothing tones of either Chopin (who was Polish, remember) or quiet ragtime, Arthur recounts his familys history and why hes ended up at this place in life.

Meanwhile, Franco is part of a contrived subplot involving some gambling debts and low-life gangsters.

Director Ted Dykstra orchestrates everything from the clever one-liners to a climactic fight that includes a couple of flying donuts with skill. During intermission take a look at the details in Anna Treuschs realistic set, from the books behind the donut shop counter to the storefront sign itself.

What will linger longer than those memories, however, is Persichinis deep, soulful performance as the former draft dodger whose family life has disintegrated.

Ive watched Persichini onstage for close to two decades, mostly in smaller, comic parts. Here, even without speaking from the shrug of his shoulders or the wounded, tired way he looks at someone you get a sense of his characters pain and regret.