NOW MagazineCultureTheatreSweat is an important play that needs a subtler touch

Sweat is an important play that needs a subtler touch 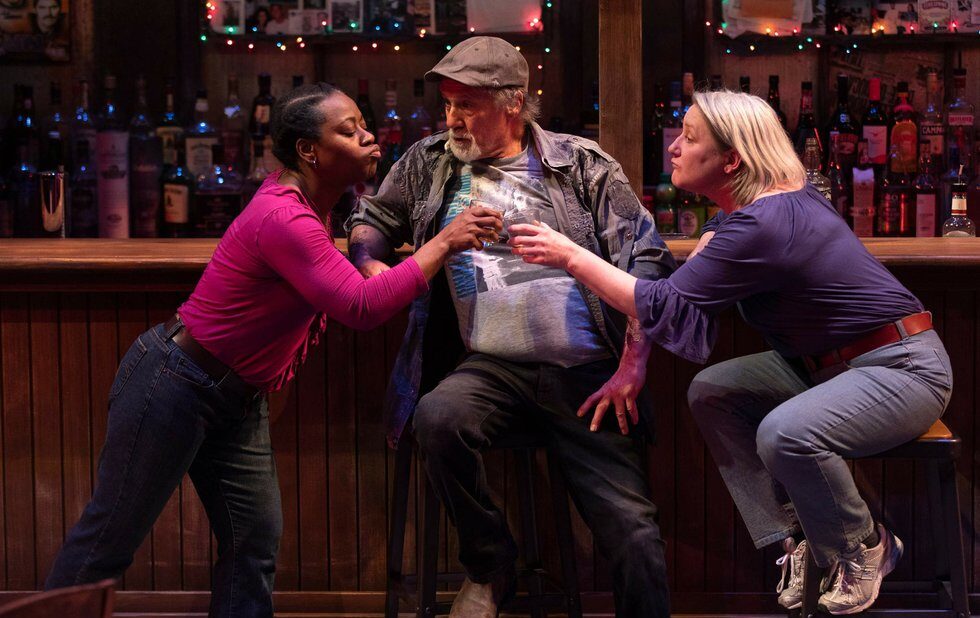 The play starts with a prologue set in 2008 the year, of course, of the economic downturn. In separate meetings, a parole officer (Maurice Dean Wint) interviews two recent ex-cons: Jason (Timothy Dowler-Coltman), a skinhead with swastika tattoos on his face and major anger issues and Chris (Christopher Allen), a quiet, Bible-clasping Black man.

It turns out the two men reunited on the streets of their home town of Reading, Pennsylvania. Soon the audience wants to know how theyre connected and what happened to land them both in jail.

Nottage then flashes back to 2000 and the neighbourhood bar run by Stan (Ron Lea), a Vietnam vet who suffered a factory accident years earlier. At the bar are long-time friends and factory workers Tracey (Kelli Fox), Cynthia (Ordena Stephens-Thompson) and Jessie (Allegra Fulton). Tracey and Cynthias sons, Jason and Chris, have recently started working in the factory, although Chris has plans to go on to teachers college.

When a position opens up in management and Cynthia decides to apply, it divides the women and their families, and as the months go by and the factory begins making changes that render the workers redundant, everyones livelihood is suddenly on the line.

Nottages script is so well-written that the expression on the line takes on different meanings, suggesting not just the assembly line (or, when the workers go on strike, the picket line) but also a very real high-stakes life or death situation.

Other themes ripped from recent headlines enter the picture. Cynthias ex-husband, and Chriss father, Brucie (Peter N. Bailey), has become addicted to drugs after being locked out of his own factory. And after she suffers a workplace injury herself, Tracey becomes addicted to opiates.

And then theres the simmering resentment towards the Colombian-American Oscar (Jhonattan Ardila), one of the bars workers whos been trying to get factory work and finally succeeds.

The script is well-researched and carefully plotted, but it feels schematic, as if character points were mapped out on a graph. Nottages earlier plays Ruined and Intimate Apparel feature more rounded characters.

It doesnt help that David Storch directs some actors Bailey and Dowler-Coltman in particular to be too broad. The most effective scenes are the quietest: the womens reminiscences about their first meetings, or Jessies bittersweet memory of her youthful, aborted plan to travel the world.

Ken Mackenzies set nicely replicates a bar, but it takes up so much of the playing area that other scenes that dont take place in the watering hole feel cramped and constricted.

Storch also uses video projections (designed by Cameron Davis) of news events to evoke the passing years, but these seem perfunctory and random.

Still, as an examination of how North America got to its current divisive economic and political situation, Sweat succeeds. Its messages are urgent, but they could come across with a bit more artfulness.