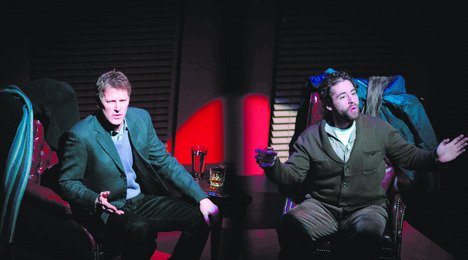 Kevin Bundy (left) and Michael Rubenfeld are all Talk and no action.

Watching Talk is like sitting in a coffee shop beside two people arguing: compelling yet somewhat annoying.[rssbreak]

In playwright Michael Nathanson’s two-hander, best buddies Josh (Michael Rubenfeld) and Gordon (Kevin Bundy) meet for drinks after having dinner with Gordon’s new girlfriend. An offhand remark deeply offends Josh (a self-described liberal Jew) because he detects that the couple (who are not Jewish) hold anti-Israel sentiments.

Nathanson’s script relies on the usual rhetoric of Middle East debate to create tension. He continually interrupts the dialogue by having Josh and Gordon stop to convey their thoughts directly to the audience. He also advances the story with lines like “It’s six months later,” leaving director Ted Dykstra with the difficult task of staging a play that lacks action.

Rubenfeld and Bundy construct dynamic, multi-layered characters who struggle to reconcile their political differences. As they rage, they also manage to express tenderness and genuine sadness over their failing friendship.

This unfolds in just over an hour, followed by a post-show chat. Opening night featured Barbara Coloroso, renowned author on bullying and genocide. Unfortunately, as the interaction became lively, the artistic director wrapped things up. Please allow more time to talk.