The Assembly: Episode 1 is charged, resonant and unnervingly entertaining 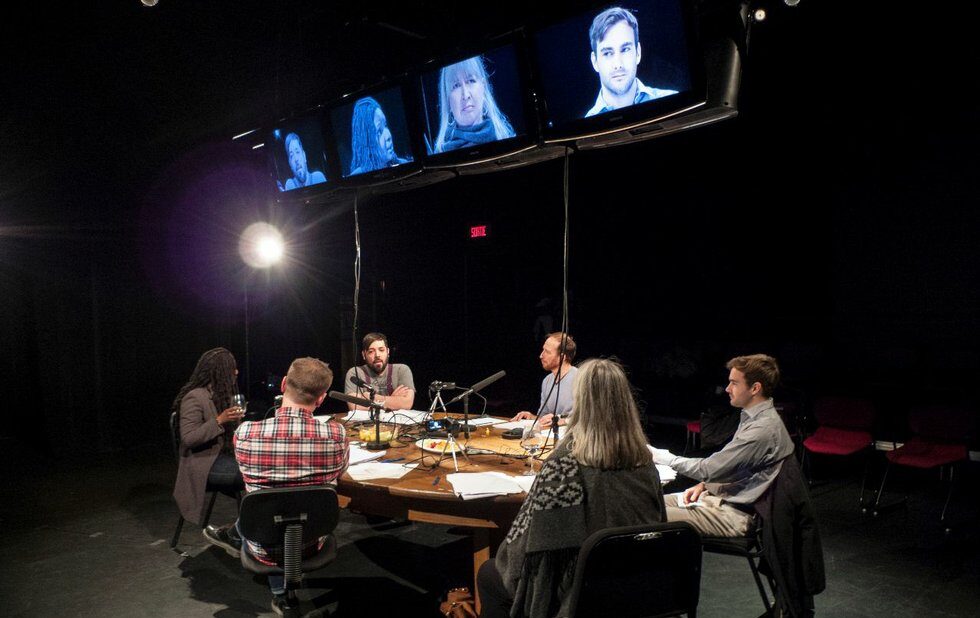 A congress of contention designed to mirror our divided culture, the latest collaboration from Montreal documentary theatre company Porte Parole and Torontos Crows Theatre unfolds in three segments, the first and dominant being a tautly edited reenactment of a conversation involving four Montrealers with hotly conflicting political positions, moderated by playwright-actors Alex Ivanovici and Brett Watson, and lubricated by several bottles of wine.

From the start, each character is asked to identify their politics, a tactic that instantly stokes animosities and underlines the inane, counterproductive, us-and-them attitude that is the root cause of the social malaise The Assembly examines.

Then shit gets real, by which I mean not the staging of a real event but, rather, an open invitation for debate to continue without artistic intervention. Audience members are asked to approach the mics and have their say. On the night I attended, the experiment was very successful, with participants commiserating over the tribalism that seems to cripple consensus and scrutinizing the creators choice of cultural cross-section.

Theres no way to apprehend the full spectrum of Canadian attitudes by gathering four people. Some audience members drew attention to the absence of Indigenous voices. I was wondering about the working class or poor. But the plays limitation is also its strength: confining the dialogue to four people leaves room for individual personalities to emerge, instead of mere demographics.

The Assembly: Episode 1 is charged, resonant and unnervingly entertaining. Its MO is to dramatize democracy in crisis, but its goal is to rekindle our faith in peoples capacity for change and this is where the epilogue comes in.

As with everything else in The Assembly, where this conversation lands will hardly shock you, but it may help keep your hope alive.

However fearful or hateful they are toward others in the abstract, most people soften in the presence of fellow human beings. And this, lest we forget, is exactly what theatre is for.

Following its Toronto run, Episode 1 plays in rep in Montreal with the entirely new francophone Episode 2. Porte Parole will embark on the creation of Episode 3 next year.