The Audience often entertains with its behind-closed-doors stories 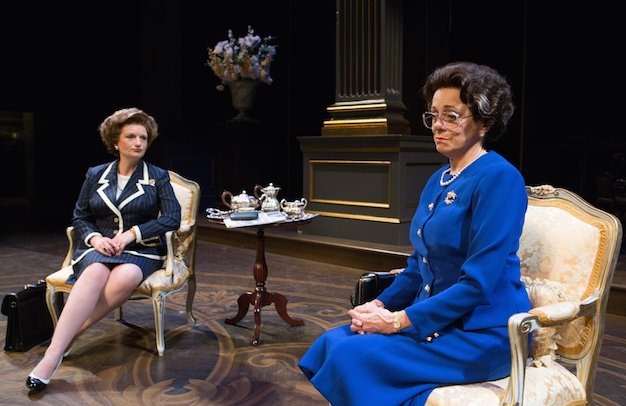 The longtime fascination with British royalty is widespread, proven by recent TV successes such as The Crown and Victoria.

Peter Morgan, the author of the former (and also of the motion picture The Queen), offers another view of Elizabeth II in The Audience, which features a number of weekly tête-à-têtes between the queen (Fiona Reid) and her prime ministers over the decades.

The play covers ministers from Winston Churchill (John B. Lowe) through David Cameron (Ben Carlson), though not all the PMs are here. At these private meetings under England’s constitutional monarchy, the queen’s role is to listen and occasionally comment the intention is to be informed by her head minister of political and other happenings that affect the nation.

The writing is a series of short scenes Morgan goes back and forth in time, sometimes allowing an event from one era to echo in another. This works especially well with two conversations about warmongering with various allies, one with Anthony Eden (Paul Essiembre) involving Egypt in the 1950s and another with Tony Blair (Kevin Klassen) about Iraq in 2003.

Sometimes the discussions barely skim the surface, not giving us much sense of the ministers or the ruler. Blair gets short shrift in his scene, and Lowe’s Churchill is too bland to present much of a foil for Reid, who in her first royal encounter with a PM has to learn her place in this exchange. (You’ll get more of the fire in that stressful meeting from the similar episode of The Crown.) Ben Campbell captures the comedy in his scene as Gordon Brown, but the writing doesn’t offer much else.

Happily, there’s a real tension in the exchange between a stormy Margaret Thatcher (Kate Hennig, wonderfully acerbic), who feels she’s been betrayed by Elizabeth’s public statements, and the queen, who is dignified but always resolute. The pair are only six months apart in age – Thatcher feels she gets an extra point by noting that she’s the elder – but there’s a gulf between them in terms of attitude and policies about the queen’s beloved Commonwealth.

Portraits of two other prime ministers stand out: Evan Buliung’s self-effacing John Major, a bit of a whinger but entertaining for that, and Nigel Bennett’s Harold Wilson, who admits in his first audience that he’s uncomfortable and begins by twitting the queen about their social differences. By the play’s end we see he’s the closest to her of them all, but, as the queen later remarks, she can be friendly with these politicians but never a friend.

There’s also fine work by Anthony Bekenn as the queen’s equerry and the show’s narrator. He takes care of her and us, giving viewers a background for the political, social and personal stakes of the individual moments.

For though her defined role is to listen and possibly over time achieve an attitude shift by a degree or two, at moments she’s almost like a therapist, concerned for and offering guidance to the person sitting opposite her. In other scenes Reid is quiet or slightly chiding when asked to give up some of her royal privileges, she’s steely. Never overwhelmed, she’s also witty.

Morgan’s cleverly added encounters between a young Elizabeth (Naomi Cronk) and her elder counterpart, episodes in which the queen offers the princess advice and warmth, reminding her that she will have to become the office, a ruler rather than an individual.

Elizabeth’s commitment to the British people is religious as well as political she’s always caring for her flock but by nature isolated from them.

These two-Elizabeth conversations become a lesson in loneliness, creating a bittersweet atmosphere in an often funny, entertaining play.