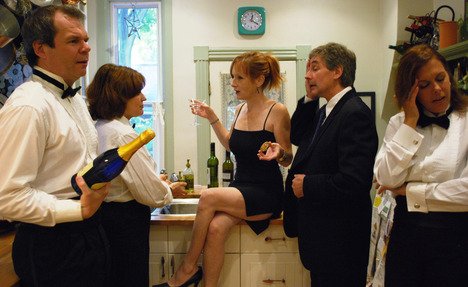 As the holiday party season approaches, it’s important to remember that caterers are people, too. Along those lines, it’s perfectly fitting that Alison Lawrence’s Fringe-approved comedy about the secret lives of hired help is getting a remount now.[rssbreak]

Set in the kitchen of a Forest Hill mansion during a law office Christmas party, the action follows four servers as they battle their way through a barrage of unreasonable guests and unexpected exes while soul-searching for a life beyond finger food and cummerbunds.

Since it’s a character-driven story, the play takes time at the outset to deploy the relational web that connects all of the caterers, but thanks to Lawrence’s cute, Toronto-centric script, it doesn’t take long to get invested in the gang’s fortunes.

My only quibble is with Melanie’s ex, Nick (Brian Young). He’s played as a clueless and naive failing film writer, and his flippant attempts to reconnect with Melanie make it tough to believe they were actually together for four years. Why would she stay with such a jerk? Giving him at least one redeeming quality or moment would make their past more believable and further complicate her dilemma.

While the ending feels a tad unrealistic, the story remains fun, with a moral that’s appropriately heartwarming.