THE FLICK by Annie Baker (Outside the March/Crows Theatre). At Streetcar Crowsnest (345 Carlaw). Runs to November 2. $30-$55. outsidethemarch.ca.. 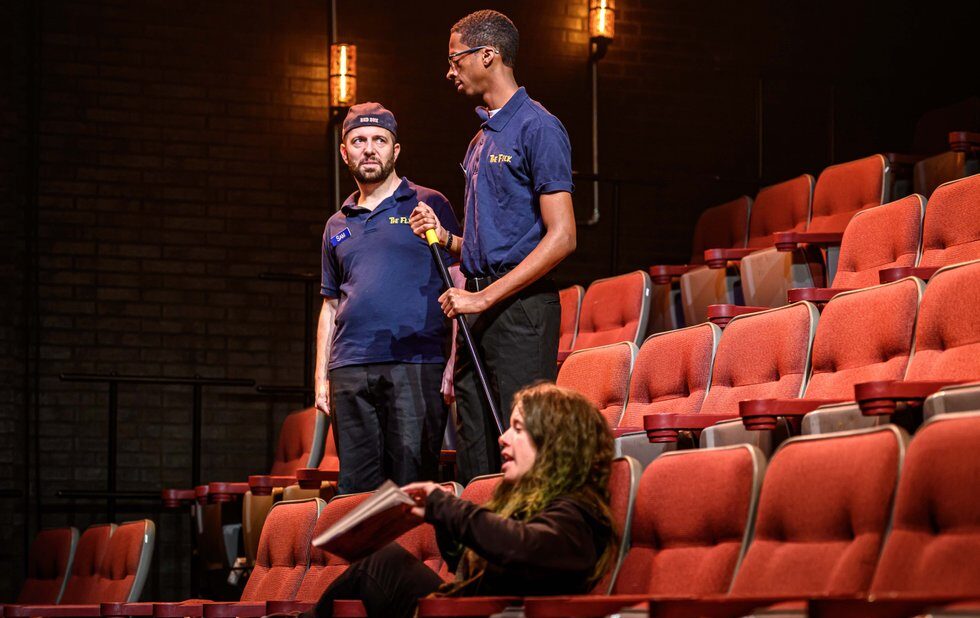 If the idea of watching people sweep up popcorn, chat about their ordinary lives and pass the time playing games like Six Degrees Of Kevin Bacon seems dull, think again. In playwright Annie Bakers hands, these and other seemingly banal activities add up to something extraordinary. The Flick, directed by Outside the Marchs Mitchell Cushman, is great theatre.

Set in the early part of this decade in a suburban Massachusetts movie house that screens 35mm films, the play which won the Pulitzer Prize for drama in 2014 lets us observe three minimum-wage employees go about their jobs.

I should point out that the audience sits where the theatres screen would be. We look out and up at Nick Blaiss remarkable replica of a movie house interior with its rows of empty seats and a projection booth at the top.

In the opening scene, veteran employee Sam (Colin Doyle) is showing the new guy, a socially awkward Black college student named Avery (Durae McFarlane), the ropes. The two sweep up the refuse, discuss how to clean up the concession stand equipment and eventually compare favourite films. Later, the extroverted millennial Rose (Amy Keating) comes down from the projection booth, and the dynamics change. Sam was passed over by their unseen boss Steve for the projectionist promotion, and hes still smarting he also has a crush on Rose.

As the days and weeks go by scenes are punctuated by blackouts and the mysterious, alien-looking effect of film lights washing over us, and the familiar sounds of studio anthems blaring (Richard Feren designed the evocative soundscape) we gradually get to know and care for these people.

One character shares a bit of gossip with another, only to later be betrayed. Others make sexual overtures or emotional confessions, then deal, or dont deal, with the fallout. All three communicate in a way that might not be as memorable as the dialogue from their favourite flicks but still rings true truer, in fact, than those romanticized lines. (Seldom have the words cool, whatever and intense been used so effectively to say what their speakers arent saying.)

Baker, as she showed in The Aliens (also directed by Cushman) and John, has an affection for all her characters. She doesnt judge them she merely presents them, with all their flaws, as truthfully as she can.

Shes dealing with a lot here, including class, economic privilege and the changing of one type of life for another.

In one sense the plays about the transition from analog to digital. There are rumours the movie house is about to replace its 35mm projector with a digital projector with all that implies about authentic celluloid vs. clean, easily replicable pixels. But its also about Averys coming of age from an insecure young man to realistic adult.

McFarlane, who recently graduated from university, is a real find, capturing Averys awkwardness with nerdy, voice-quavering naturalism. Keating invests Rose with lots of complex, seemingly contradictory layers. And most poignant of all is Doyle, whose stoop-shouldered gait, slow-dawning smile and side-eye looks tell you a lot about his stage of life. He also sports the saddest haircut of any character this theatre season.

These arent the type of people who are usually the subject of plays or movies. But as Baker and Cushman illustrate, their hopes and dreams, even in a soul-crushing society, deserve our full attention.