The Humans is a funny, dramatic and deeply humane play 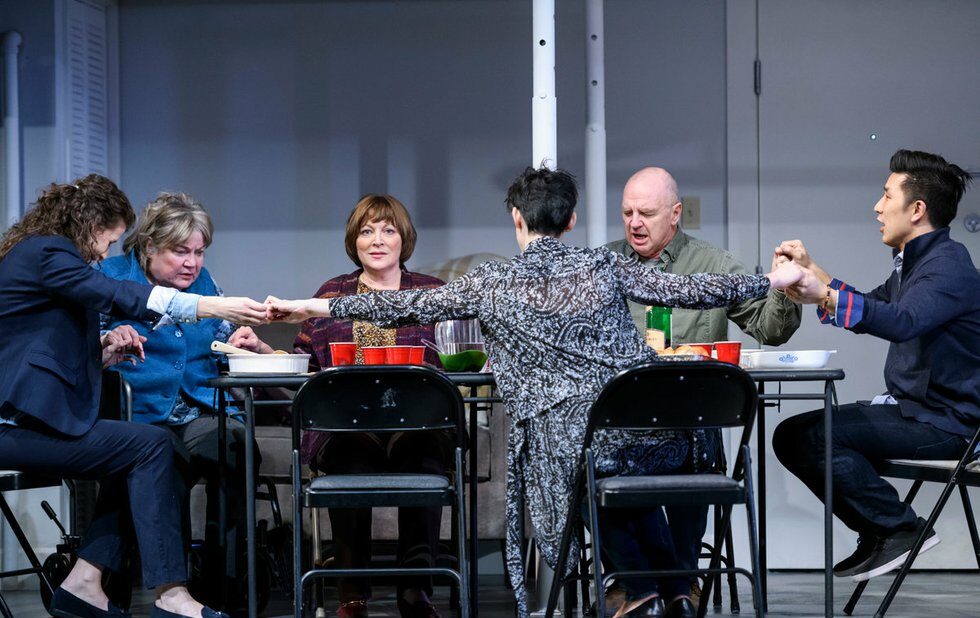 Weve all endured holiday family dinners fraught with tension over money, jobs (or lack thereof), religion, food and health. In Stephen Karams brilliant play The Humans, the Blake clan clashes amiably over all of the above and more, including the insane real estate situation in New York City.

Younger daughter Brigid (Sara Farb) and her older boyfriend, Richard (Richard Lee), live in a ground-floor-with-basement duplex in Chinatown, and her parents, Deirdre and Erik (Laurie Paton and Ric Reid), sister Aimee (Alana Hawley Purvis) and grandmother Momo (Maralyn Ryan) have driven through the snow from Pennsylvania for Thanksgiving dinner.

Along with a couple of gifts, they come with other baggage, like Momos advanced dementia and immobility, Aimees serious intestinal problems and recent breakup, and some rift between the parents that will be revealed as soon as talk about superfoods, bad bosses and expensive NoLita boutiques dies down.

Karam has a great ear for dialogue, nailing both the down-to-earth cadences of the devout middle-class parents and ironic, secular utterances of the younger generation. And hes crafted a wise and funny script that captures so many of the divisions in post-9/11 America.

Under director Jackie Maxwell, the cast navigates this world with complete authority.

Reid exudes a working-class Everyman aspect in his stolid posture, hilariously droll pronouncements and by inspecting the apartments caulking and windows Paton delivers a complex portrait of a woman trying to get a broader perspective on post-recession hardship by doing volunteer work and sending her kids informative emails Purviss soon-to-be-unemployed lawyer masks a lot of pain beneath her tough, wise exterior and Farb and Lee suggest some aggression beneath their playful banter. (The ongoing fight between Deirdre and Brigid is communicated even more effectively than it was in the Broadway production.)

Judith Bowdens set is hyper-realistic in its details and, along with Matthew Skopyks sound and Michael Waltons eerie lighting, allows for the plays most intriguing aspect, a sort of supernatural quality.

Are these effects some Bergman-esque communique about the existence of God? An upstairs neighbour? Ghosts avenging the characters humanitys? misdeeds?

Theyre never explained, and that adds a layer of mystery to this great play and must-see production.