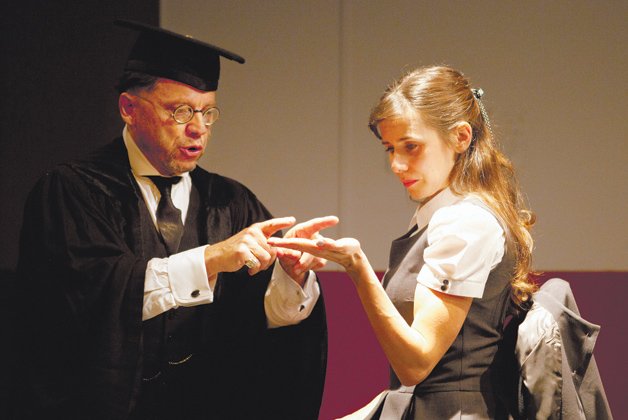 Eugene Ionesco’s The Lesson is always instructive, especially when it’s presented in as clear and powerful a way as it is in this version by Modern Times.

A young pupil (Michelle Monteith) visits a professor (David Ferry) for a lesson, and things go from good to bad to worse. The play ends as it begins, with a new student ready to submit to the professor’s lesson.

Ionesco’s parable about fascism needs to be carefully modulated so the tension never slackens, and director Soheil Parsa delivers a taut reading.

Ferry’s professor, outfitted like a Trinity don, is all obsequiousness at the start. But as Monteith’s perky student begins to make mistakes, lose confidence and eventually succumb to a toothache, he expresses shock and growing fury. A maid, played curiously in drag by Costa Tovarnisky, is there to look after the professor’s needs, and in an especially sinister touch, monitors the lesson through the house’s narrow slit-like windows.

The design is as spare and suggestive as the script. Thomas Ryder Payne’s sound over-amplifies doorbells, offers up the mysterious clinking and clanging of plumbing and hints at guard dogs in the distance, while the wall of Anahita Dehbonehie’s set is dominated by a big, bold horizontal red stripe in addition to those prison-appropriate windows. Two adjustable office chairs seem like the most banal pieces of furniture until the characters begin to use them.

The script’s stage direction that the professor don a red armband near the climax feels, to contemporary sensibilities, like overkill. But it hammers home one of the brutal truths of this enduring, disturbing play.