The Lieutenant Of Inishmore

THE LIEUTENANT OF INISHMORE by Martin McDonagh (Rep 21). To December 12. See listing. Rating: NNNNSometimes a comedy is so. 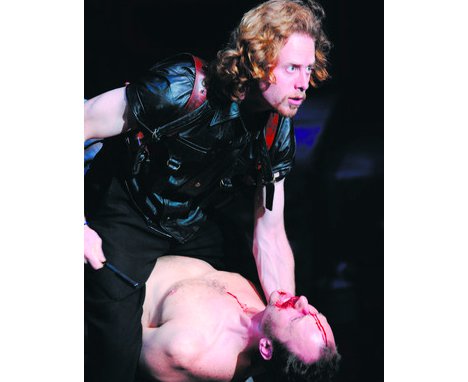 Sometimes a comedy is so black, it turns red.[rssbreak]

In The Lieutenant Of Inishmore, Anglo-Irish playwright Martin McDonagh blood-soaks nearly every scene and makes a potent statement about the absurdity of radical violence.

On the Irish island of Inishmore in 1993, lunatic activist Padraic (Matthew Krist) returns home from a bombing-and-torturing spree to find that his beloved cat, Wee Thomas, has been killed. The discovery ignites a brutal revenge gorefest.

The unremitting violence could easily overpower the message, but McDonagh’s intricate language and humour – to the point of farce – keep us engaged. The frustration of watching characters that fail to evolve makes the impact of the play’s conclusion astonishing.

At times, the transition between scenes feels cumbersome, and the sporadic addition of Irish music seems like a device, but Rod Carley directs the action with restraint. The performers actively listen and never rush through the dialogue.

Uneven acting affects the play’s impact, especially in the terrorist roles. While Krist rages ferociously, he lacks believable lunacy. However, as Joey, the thug with a hint of a conscience, Benjamin Clost adds welcome subtlety. Jennifer Matthies, the sole female, expresses deep desire and conveys gravity.