Irene Poole astonishes in revival of The Little Years 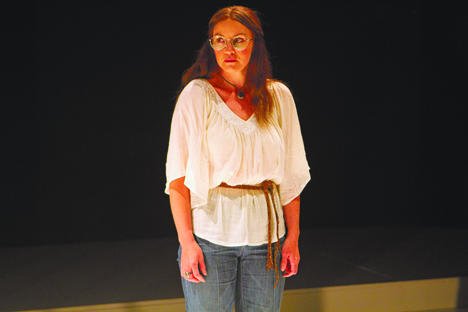 John Mighton’s The Little Years is the theatrical equivalent of throwing a pebble into a still pond and watching the ripples spread across its surface.

Nuanced, emotionally subtle and filled with first-class performances, the production, directed with intelligence and careful shading by Chris Abraham, is a gem at this year’s Stratford Festival.

At its centre is Kate, initially an enthusiastic teen (Bethany Jillard) thrilled with investigating the mysteries of time and space she yearns for a career in science. But it’s 1957, and her mother, Alice (Chick Reid), pooh-poohs the idea girls get married and have families, they don’t become thinkers. Alice favours her son, William, an award-winning student.

We next meet the adult Kate (Irene Poole), a downtrodden secretary whose sharp edges keep almost everyone away, though her sister-in-law, Grace (Yanna McIntosh), married to William (now a famous poet), does her best to befriend Kate.

The play concludes 45 years after it began, with Grace’s daughter Tanya (Jillard) making an unexpected connection with her Aunt Kate and cracking the shell inside which the main character has shielded herself for decades.

Mighton tackles larger ideas, too – the nature of affection, fame and time, among others – with humour and insight. Intriguingly, he weaves references to time throughout the fabric of the play. Lines from a current scene echo those of another from years past. As we drift between past and present, do the words mean the same thing? As well, just as time changes us, does our perception of time also change?

Abraham’s crisp direction defines the characters – including Roger (Evan Buliung), a painter who becomes part of the family’s life, and a school principal (Victor Ertmanis, who plays several conservative male roles) – making all their unspoken emotions crystal clear to the audience.

Reid is a tart mother, always critical of her daughter. McIntosh gives Grace a quiet enthusiasm, investing the character’s personal and political passions with believable candour.

But it’s Jillard and Poole who are at the richly textured centre of the production. Jillard’s properly enthusiastic and likeable as the young Kate, with a whole world unfolding before her before it’s closed off. She has a quieter but still glowing warmth as Tanya, embarking on her own journey at play’s end.

Poole has the harder job, since the elder Kate’s sharp edges are rarely retracted. But the actor helps us understand the woman’s yearning, anger and passion. She gives the first act a heartbreaking finale and the final curtain an even more compassionate turn.